"Benafsha and I were actually seeing each other since Bigg Boss, but a lot of people didn't know about it. We didn't ever want to come out till the time there was some surety and we were figuring ourselves out. And I must say, it's been a good 2.5 years. We found each other inside the BB house and wanted to take our time to make it tighter as a relationship," revealed Priyank. 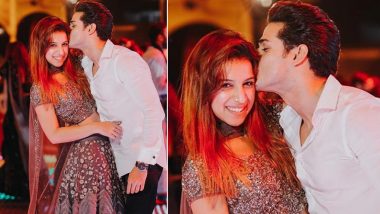 Priyank Sharma and Benafsha Soonawalla met during their stint on Bigg Boss 11 and soon rumour mills were abuzz with news of how Priyank was cheating on his Splitsvilla girlfriend Divya Agarwal. The latter even entered Bigg Boss 11 and broke up with Priyank on national TV that caused a huge stir. What followed was bad blood between Priyank and Divya. Also, after stepping outside the BB house, Benafsha broke up with her boyfriend Varun Sood, and things got really ugly between the four of them. Kiss of Love! Priyank Sharma and Benafsha Soonawalla Make Their Relationship Insta Official (View Pic).

However, alls well now, considering Varun and Divya who were besties, eventually started dating after being locked up in the Ace of Space Season 1 house. And recently, Priyank Sharma and Benafsha Soonawalla also decided to make their relationship official.

In a live session with India Forums, went all out and decided to speak up about the whole ruckus that their situation created back when Priyank and Benafsha were locked up inside the BB 11 house and also revealed why he and his lover decided to stay mum on their relationship for so long. Vikas Gupta Opens Up About His Fight With Priyank Sharma, Says ‘He Takes Steroids and Needs a Doctor’.

Revealed Priyank, "Benafsha and I were actually seeing each other since Bigg Boss, but a lot of people didn't know about it. We didn't ever want to come out till the time there was some surety and we were figuring ourselves out. And I must say, it's been a good 2.5 years. We found each other inside the BB house and wanted to take our time to make it tighter as a relationship.”

Clarifying how his break up on National Television was in fact not a breakup but a plot by creatives, Priyank opened up on the live session and clarified things once and for all.

"It’s actually not about me but more from a girl's point of view. First of all, I did a show like Splitsvilla, where actually nobody dates. In fact, no one has ever dated anybody in the last 12 seasons of Splitsvilla. That girl who was never my girlfriend and who I never dated, it was a show, people need to understand we do something for entertainment stuff, I am not saying that the bond was wrong. There was a lot of affection but that was a show, we came out of the show, we cleared out our differences. I cleared it out in front of people that I was moving on." Divya Agarwal’s Private Chats With Benafsha Surface On The Former’s Instagram Page After Priyank Sharma’s Post!.

He continued, "I go to another show, Bigg Boss and another 'breakup' of mine happens there. We had actually shot for Splitsvilla three months before I entered BB and while I was locked up, Splitsvilla was airing, but my life had moved forward. Bigg Boss was currently happening and luckily this (he met Benafshaa) happened for me. We came out of the house, there were two other people who went on another reality show.

"Even though we (He and Ben) met them a week before at Prince Bhai's (Prince Narula) wedding and spoke normally, they go to a show and start saying things which were completely nonsense. So I was like forget about me, I am a guy, you are going ahead on national television and trying to take the reputation of a girl down. Like are you even a guy who has ever loved? Because if I have ever loved a girl, I’ll never do this to her on National Television," a baffled Priyank revealed.

He continued, "So all of that was a phase and I did not know what to do. For me, this (his relationship with Ben) was purity and I just didn't want people to put a dirty mark on it. So I was just keeping it to myself. We have been together like that only, we don’t care what the world says because we have our side of the story. I love her genuinely and she loves me. I cannot go on national television and speak nonsense about the girl I genuinely love, we all know they wanted something out of it." After Erica Fernandes, Hina Khan and Dipika Kakar, Now Priyank Sharma Gets Dolls Fashioned on His Looks (View Pics)

Rehashing his Bigg Boss breakup, Priyank opened up and said, "Coming to Bigg Boss also didn’t make sense for a breakup. I can understand from a creative aspect, that the creatives wanted that because Splitsvilla was also airing at the same time, so they wanted closure so I gave that. But I didn't understand that right after one year, why would people go ahead and speak? I am sure they must have better work to do than speak about me and Ben, and that was not just one or two persons, there were three of them. I won't take the names as they are not important, we all know that."

"We were taking our time, as its very sacred and pure. I have a lot to say because I have not spoken for past 2.5 years and now when it comes to Ben no one can mess around. We both are very protective about each other. We have always been quiet and our work has spoken. That is more than enough. I have always looked at the positive side of what God has given me. And I want the best for Ben as well. She is just 23 and I'll never let her shift her focus from me, her family and work because rest all is not important," concluded the dreamy boyfriend. Wow!!!

(The above story first appeared on LatestLY on Apr 10, 2020 04:32 PM IST. For more news and updates on politics, world, sports, entertainment and lifestyle, log on to our website latestly.com).