Ramanand Sagar Birth Anniversary: Did You Know The PMO Insisted The Director-Producer Made Uttar Ramayan After The Government Insisted On It?

Ramayan was first aired in the 80s which led to deserted roads. Many decades later, deserted roads led to re-airing of the series, but the impact has been the same. But despite all that, did you know, Ramanand Sagar had no interest in making Uttar Ramayan chapter until PMO intervened? 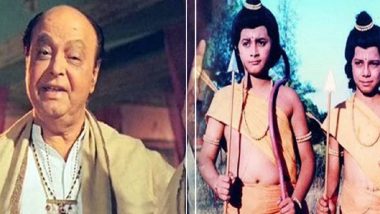 Ramayan was more than just a show. Ramanand Sagar had created an epic of proportions nobody could ever guess. When it first aired in the 80s on Doordarshan, it led to deserted roads. Many decades later, deserted roads induced by the lockdown led to re-airing of Ramayan on Doordarshan. The impact has been equally same with people going gaga over the simplistic and yet true representation of Valmiki's epic. If reports are to be believed, he was a devout Ram Bhakt as well. Prem Sagar, his son, had revealed to Hindustan Times that while shooting Charas in a border town somewhere in France, his father was introduced to Television. He then resolved to bring mythology on the small screen, Ramayan was the first one. But did you know, he had no interest in prolonging the series to Luv Kush or Uttar Ramayan chapter beyond Sita's return to Lord Ram after vanquishing Ravana? Ramanand Sagar's Son Prem Sagar Reveals The Secret Behind The Special Effects That Ramayan Makers Would Create On Their Own.

A Mumbai Mirror report reveals that during a video press conference last year, Dipika Chikhlia, who played Sita, revealed that Ramanand Sagar was against Uttar Ramayan because he couldn't accept Lord Raam would do such a thing to Sita. "Because of his respect for women, he took liberty in showing a few things. He told the government that he won't make Uttar Ramayan because he could not agree that a person like Ram can throw his wife out. He had clearly told them he will only do it till Ram Rajya," she added. Dipika Chikhlia Reveals WHY Ramanand Sagar Fell Into Legal Trouble During Uttara Ramayan Shooting (Deets Inside)

Ramanand Sagar's son Prem Sagar had said something similar in an interview as well where he mentioned that the filmmaker started getting calls from the PMO insisting that he should continue the story ahead. The Valmiki Samaj too came urged him to continue. That's when he relented.

(The above story first appeared on LatestLY on Dec 29, 2021 08:50 AM IST. For more news and updates on politics, world, sports, entertainment and lifestyle, log on to our website latestly.com).