Ramayan: Arun Govil Reveals Which Scene From the Mythological Show Was the Toughest for Him to Shoot (Read Details)

Ramayan's Ram aka Arun Govil in a Twitter chat session (#AskArun) revealed which was the most emotionally challenging scene for him to shoot. Read. 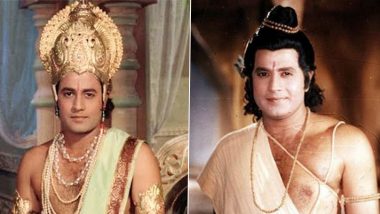 Doordarshan has been enjoying great TRPs, courtesy Ramayan and Uttar Ramayan. The iconic shows from the 80s which made a comeback due to the nationwide lockdown have also beaten the viewership numbers set by shows like Game of Thrones and Big Bang Theory. On Saturday (May 2) night, Uttar Ramayan's last episode was aired where Twitter could not pause its emotions and #UttarRamayanFinale and #ThankYouRamayan were among the top trends. Amidst this, Arun Govil aka Ramayan's Ram also had conducted a #AskArun session on the micro-blogging site. Arun Govil and Sunil Lahri Look Strikingly Handsome in This BTS Picture From Their Ramayan Days and We Just Can't Stop Staring.

While many questions were popped during the chat session. However, when a fan asked Govil which was the most difficult scene for him to shoot and act. The answer by the actor was quite a revelation. Arun revealed that the scene which was the most difficult for him was to hear the news of King Dashrath's (Ram's father) demise and react to the same. With the answer, we can also crack that the onscreen Ram is quite emotional in real life. Lord Ram For Congress! Arun Govil, Actor Who Played Ram in Ramayana Likely to Fight Lok Sabha Elections 2019 From Indore On Party Ticket.

Check Out Arun Govil's Reply To A Fan Below:

hearing the news of King Dashrath' death and reacting on that. https://t.co/yvK7mvidKa

Post the re-run of Ramayan, not just the show, even the characters from the mythological show are getting immense love. Be it Arun Govil, Dipika Chikhlia, Sunil Lahri or others many have been garnering praises for their role in the epic saga. For the unversed, the show was made by late Ramanand Sagar. Stay tuned!

(The above story first appeared on LatestLY on May 03, 2020 10:09 AM IST. For more news and updates on politics, world, sports, entertainment and lifestyle, log on to our website latestly.com).