Captured in a candid frame, Arun is seen helping Sunil take off something from his face, probably make up. But the bond that the duo shared in real-life comes to life in that photo. 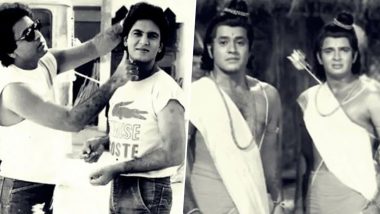 Actors Arun Govil, Sunil Lahri and Deepika Chikhlia became a sort of icons after they played the Ram, Laxman and Sita trio in Ramanand Sagar's 1986 show Ramayan. The television series transported them to a world where they were considered real-life Gods with their pictures being framed and placed in mandirs at home and people stopping them to take blessings. And as much as the experience was pretty surreal, we totally feel the craze that came with playing the mythological characters. Ramayan TV Series Returns To Television During COVID-19 Lockdown: 12 Interesting Facts About The Ramanand Sagar Show That You Need to Know.

Amidst the on-going lockdown, Doordarshan decided to re-air their 90s cult shows like Ramayan, Mahabharat, Dekh Bhai Dekh, Buniyaad, Fauji among others. But the winners have been Ramayan and Mahabharat. While Ramayan's premiere on March 28, 2020 recorded record-breaking TRPs, the show also topped the ratings in all categories in its second week, with Mahabharat following closely behind in the second spot. Doordarshan's Ramayan Tops All Categories In BARC Ratings For March 2020

While we've established that Ramayan was a cult show, we also claim that the Jodi of Ram and Laxman, Arun Govil and Sunil Lahri is also an epic Jodi. While we've had many more versions of Ramayan come to television after Ramanand Sagar's version, there was no Ram-Laxman Jodi like that of Arun and Sunil. Twitterati Trend Ramayan's Meghnath, Praise the Character For Being a Great Warrior and a Dutiful Son (Read Tweets).

We recently came across a BTS picture of Arun Govil and Sunil Lahri from their Ramayan days on the sets of the show. In the image, we can see Arun and Sunil in casual clothes, looking painfully handsome.

Captured in a candid frame, Arun is seen helping Sunil take off something from his face, probably make up. But the bond that the duo shared in real-life comes to life in that photo. Don't you agree too? Ramayan's Original Ravan, Actor Arvind Trivedi, Apologises to Viewers After Watching 'Sita Apaharan' Episode of the DD National Show (Watch Video).

Arun Govil and Sunil Lahri's on-screen affection for each o0ther as Ram and Laxman did translate off-screen too where the duo struck a great bond. In fact, they even went on to open a production house of their own and have worked as partners too. Well, this picture of the actors has definitely made our day.

(The above story first appeared on LatestLY on Apr 18, 2020 09:16 AM IST. For more news and updates on politics, world, sports, entertainment and lifestyle, log on to our website latestly.com).