Ramayan: How The Twitter Generation Has Helped The Cult Doordarshan Show Re-Discover Itself!

Ramanand Sagar's mythological show that aired on Doordarshan back when the concept of watching television daily was alien, has taken the nation by storm. 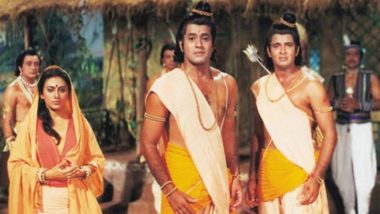 India is right now getting their head wrapped around the idea that lockdown is getting extended with every passing day. Of course, the entertainment industry too is right now locked with artists following the quarantine rule. This led to TV channel broadcasters re-telecast some of the iconic shows from the past. Even though there are a plethora of them which are back in the small-screen game, it all started with Ramayan. Ramanand Sagar's mythological show that aired on Doordarshan back when the concept of watching television daily was alien, has taken the nation by storm.

Till now, it was all about the stories that most of the new generation heard from their parents. The stories of how Sunday was religiously dedicated to this cult show, how people almost worshiped those actors visible on screen and how the roads were left deserted during the prime slot. Well, the situation somehow is similar. We see deserted roads and people are watching Ramayan. However, this time, it is this huge generation gap and most importantly, their reactions!

When the decision of the DD airing Ramayan was given, I had mixed feelings about it. With so many digital streaming platforms at the service of this Gen Z, why would they opt for Ramayan? Even if they would for the sake of boredom and their parents, would they relate to it? But surprisingly, they totally do!

No one must have really expected the young netizens getting hooked to the story of Ram and Ravan with such enthusiasm. And that enthusiam has trickled down on the social media platforms in the form of memes and trends. It is now seen that with every spot-on episode, Twitterati gets overwhelmed with emotions as if they have re-discovered the childhood tale through a new kaleidoscope. What could be the reason?

Apart from the common factor of nostalgia, the story itself has turned out to be a topic of fascination. Ramayan, in someway is known to every kid through books, films or animated shows. However, the full-fedged execution of this epic through the DD show has somehow managed to hold the attention of the old and new minds, alike. However, the expression is different.

While older generation believed in believing, the newer generation is more about trending. Memes are made, jokes are created, comparisons are drawn but all in awe. This generation emotes with tweets and 'haha' reacts. However, that indeed has helped the makers. The result of netizens being in love with the on-screen characters and actors who played that has helped them be on surface like never before. Actors like Aslam Khan, who played multiple roles in the serial, got nation-wide recognition like never before. Be it calling the character of Angad as 'savage' and comparing him with Marvel's Thor or be it knowing the lesser-known side of always-mocked-character Kumbhakaran, new viewers are finding new meanings. Whoever said ye aaj kal ke bacche kuch nahi jaante, might just want to take their words back!

Well, as they say, old is gold. When on one side, desis were raving about Netflix's Money Heist Part 4, on the other side, they were also raving about their good ol' Ramayan. The new gen has somehow found the way to strike a balance, we must say. This airing of the classic show once again, has surprisingly turned out to be a boon for the makers, actors and the young-old audience! Keep them trends running!

(The above story first appeared on LatestLY on Apr 14, 2020 05:43 PM IST. For more news and updates on politics, world, sports, entertainment and lifestyle, log on to our website latestly.com).