Salman Khan Reacts to Bigg Boss 15’s Arrival on OTT First, Says ‘It Is Truly for the People’

Salman Khan on the occasion of Eid on Wednesday has treated fans with the promo of the upcoming Bigg Boss OTT. The actor finds it great that this season the show will have a digital first with Bigg Boss OTT, six weeks ahead of its television run. 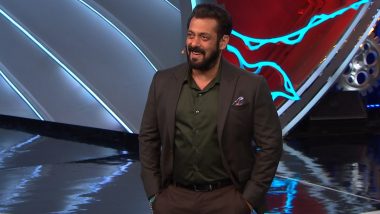 The actor, who has been a part of the show as a host for over a decade, shared advice for all the contestants who will be seen in the show. He added: "My advice to all contestants is to be active, entertaining and conduct themselves well in the BB house." In the promo, Salman can be seen bursting with joy has he declares and warns the audience to gear up for the upcoming season. Bigg Boss 15: Salman Khan’s Reality Show Will Stream Its First Six Weeks on OTT and Then Make a Gradual Shift to TV

He is heard saying: "Is baar ka Bigg Boss, itna crazy, itna over-the-top, TV par ban ho jayega.." Salman also shared that he will be seen hosting on television. It is speculated that the digital version will have a different host, however no confirmation has been made. The digital version of the show will air on Voot.

(The above story first appeared on LatestLY on Jul 21, 2021 05:13 PM IST. For more news and updates on politics, world, sports, entertainment and lifestyle, log on to our website latestly.com).