With her help, Rishab manages to give the injection and Sid calms down. Rishab tells Ishaani to assist him with surgery to Sid else it may cause dangerous for him. He forcefully drags Ishaani. 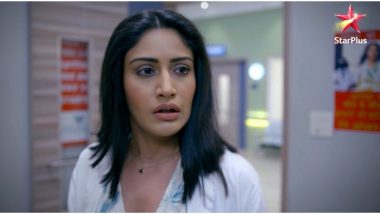 In yesterday’s episode of Sanjivani 2,  Ishaani causes Sid’s pulse to spike when she touches his hand accidentally. NV defends Ishaani in front of the other doctors when they try to slander her name. In tonight's episode, we see Ishaani (Surbhi Chandna)  says that why she is reacting when Sid is around her as she has promised that she will not get affected by him. NV tells Ishaani that she should be strong and not leave her confidence. Ishaani panics seeing Sid’s (Namit Khanna) condition. His pulse keeps dropping and Rahiil and Rishab try reviving him. NV urges Ishaani to do something but she remains unmoved. Rishab gives shock treatment to Sid but nothing works and his pulse drops completely shocking everyone. Ishaani gets shocked to the core and immediately takes the defibrillator and gives him a maximum shock. Sid regains pulse and shouts Ishaani surprising and shocking everyone but soon falls unconscious. NV thinks that finally Ishaani succeeded in treating Sid and his hope won too. Sanjivani 2 February 5, 2020, Written Update Full Episode: Ishaani’s Touch Affects an Unconscious Sid, NV Defends Her Actions before the Doctors.

NV asks Rahiil about Sid’s condition. Rahil says that now everything is stable and NV praises Ishaani. NV gets a call and informs everyone that it’s an emergency. He asks everyone to assemble outside and they all rush. Ishaani is still watching Sid in shock. NV gets informed that a bridge collapsed and many people need immediate treatment there. He asks the team to go there and help the needy. They say that they are very less in number and need to be in the hospital. NV says that they need to do this and encourages them that together they all can do it.

Later, NV goes to Ishaani and praises her for saving Sid on time. He asks her to take care of Sanjivani in his absence as he trusts her. He leaves with the team to the spot while Rishab with few other staff stays in Sanjivani. Ishaani is still thinking about Sid when all of a sudden Sid gets a seizure attack.

Rishab asks Ishaani to help him but Ishaani stands still. She takes her tablets. Rishab tries to inject him but his body couldn’t be controlled. He asks the Nurse to call Rahiil and Philo from the accident spot informing about Sid’s condition. At a point, he’s about to hit his head in the nearby table but Ishaani holds on time. With her help, Rishab manages to give the injection and Sid calms down. Rishab tells Ishaani to assist him with surgery to Sid else it may cause dangerous for him. He forcefully drags Ishaani.

Meanwhile, Rahil gets a call from the hospital about Sid’s condition and informs NV of the Seizure attack. NV tells him to rush to the hospital. Rishab asks for Ishaani’s assistance in the O.T. but she still stands unmoved.

In the precap,  Rishab asks her to just do what he says and he makes a major mistake. He blames it on Ishaani shocking her.

(The above story first appeared on LatestLY on Feb 06, 2020 08:38 PM IST. For more news and updates on politics, world, sports, entertainment and lifestyle, log on to our website latestly.com).