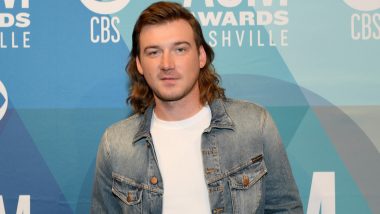 American country music singer Morgan Wallen has been pulled out from performing at this week's 'Saturday Night Live' (SNL) after partying maskless and breaking the COVID-19 protocols. As per Variety, Morgan Wallen is no longer this week's 'Saturday Night Live' musical guest. The singer took to Instagram to share an emotional video from his hotel room at NYC, where he was preparing for the weekly show. SNL Song Asking Parents To ‘Let Kids Drink’ Alcohol During Quarantine Triggers Online Debate

In the video, he told the fans that he had received a call from the show informing him that he would no longer be able to play for the October 10 show because of the COVID-19 protocols at 'SNL'. Referring to his Tiktoks from recent days where he was seen socializing in Alabama without a mask at a crowded bar and a house party he said that he has not tested positive but "my actions from this past weekend were pretty short-sighted, and have obviously affected my long-term goals and my dreams." Saturday Night Live Returns to Studio with Jim Carey, Alec Baldwin’s Parody of This Week’s Presidential Debate (Watch Video)

"I respect the show's decision because I know I put them in jeopardy, and I take ownership of this. I'd like to apologize to 'SNL,' to my fans, to my team for bringing me these opportunities, and I let them down," the 27-year-old singer said. He added, "And on a more personal note, I think I have some growing up to do. I think I lost myself a little bit....I'm going to take a step back from the spotlight for a little while and go work on myself. I wish I could have made country music and my fans proud this Saturday, but I respect the decision once again."

Wallen also said that 'SNL' chief Lorne Michaels gave him a lot of encouragement and told him that the show would find another time to make this up. According to Variety, no new musical guest has been announced to play in Wallen's place.