The upcoming episode of Taarak Mehta Ka Ooltah Chashmah, will see Bhide at his investigative best. After Tapu sena realizes that their only chance of hosting the pizza party during the lockdown is at someone’s house, they narrow in on one of the houses in Gokuldhaam Society. 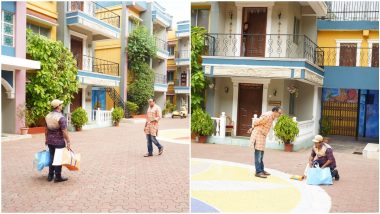 The upcoming episode of Taarak Mehta Ka Ooltah Chashmah, will see Bhide at his investigative best. After Tapu sena realizes that their only chance of hosting the pizza party during the lockdown is at someone’s house, they narrow in on one of the houses in Gokuldhaam Society. But which house? That’s for later. For now, they have identified one house that is empty and have once again sought Abdul’s help to sneak the pizzas into the building. Taarak Mehta Ka Ooltah Chashmah Episode Update: Bhide Imposes Another Lockdown In Gokuldhaam Society After COVID-19 Cases Rise In the City.

Abdul agrees and smartly camouflages the pizzas along with other items to be delivered to the residents. However, he crosses paths with Bhide in the compound, and Bhide gets a whiff of pizzas. Taarak Mehta Ka Ooltah Chashmah: India's Best Dancer's Next Episode To Welcome TMKOC Team To Celebrate Its 3000 Episodes Completion.

After realizing that the Club House is not an option to host the pizza party, Tapu sena is in a catch-22 situation. Neither can they have the pizza nor can they think of throwing it away. Additionally, Goli is making things even more difficult for all of them with his constant reminiscence of biting into the cheesy-gooey pizza and this being the only desire of his life.

Somehow, Tapu comes up with a plan, although pretty risky, but a plan nevertheless. Tapu has the keys to one of the houses in the Society which presently is vacant. Because it shouldn’t take them more than an hour to get done with their pizza party, they decide to borrow the space without informing the owner of the house.

Meanwhile, as Abdul and Bhide cross each other in the Society compound, Bhide gets a strong waft of fast food. Much like that of a pizza and asks Abdul about it. Abdul feigns complete ignorance and denies smelling anything like a pizza. Bhide tries to dig into Abdul’s bag to see for himself, since the aroma seems to be originating from there.

Luckily, Tapu who is standing in his balcony sees Abdul getting cornered by Bhide and comes to his rescue. Tapu calls out to Bhide and makes up a story about Sonu to divert attention from the pizza. But will Tapu’s plan work? Will Bhide take Tapu’s bait and leave Abdul alone or will Tapu sena’s plans get busted?

(The above story first appeared on LatestLY on Dec 10, 2020 04:02 PM IST. For more news and updates on politics, world, sports, entertainment and lifestyle, log on to our website latestly.com).