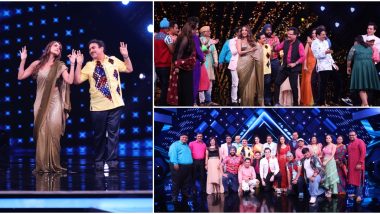 The show will see some moves from the residents of Gokuldhaam Society, each of whom has a unique style and persona. The two parts episode will be dedicated to Taarak Mehta Ka Ooltah Chashmah’s journey of over the last 12 years and will celebrate its success with music, dance and of course, comedy! Taarak Mehta Ka Ooltah Chashmah Episode Update: Jethalal Lands In Trouble, Is Unable To Source Navratri Outfits For His Society Friends After Making Tall Promises.

The current episodes of TMKOC are showing how after a lot of hits and misses, Gokuldhaam society members have succeeded in making arrangements to celebrate Navratri with as much enthusiasm and zeal as every year, with the exception of not gathering in the society compound together and playing garba.

(The above story first appeared on LatestLY on Oct 28, 2020 07:10 PM IST. For more news and updates on politics, world, sports, entertainment and lifestyle, log on to our website latestly.com).