The new episodes of The Late Show With Stephen Colbert have been cancelled until further notice after the emergence of Covid-19 symptoms of its host, reports Variety. 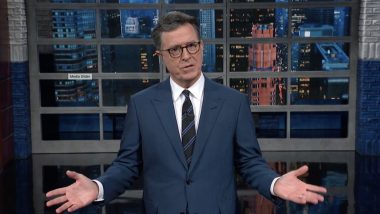 The new episodes of The Late Show With Stephen Colbert have been cancelled until further notice after the emergence of Covid-19 symptoms of its host, reports Variety. The news comes only a few weeks after Colbert's Covid diagnosis paused taping from April 21 to May 2. The official Twitter handle of 'The Late Show' shared an update on the microblogging site. The tweet read, "Stephen is experiencing symptoms consistent with a recurrence of Covid. Out of an abundance of caution for his staff, guests, and audience, he will be isolating for a few additional days (sic)." Jon Batiste Tests Positive For COVID-19, Postpones Premiere Of American Symphony At Carnegie Hall (View Post).

As per 'Variety', after the show host's initial diagnosis, the show paused its taping of an episode with 'Ozark' stars Laura Linney and Jason Bateman, before taking a previously announced hiatus through May 2. The show, which is currently in its seventh season, has since aired five new episodes, with guests including Daniel Craig, Glenn Close, Sheryl Crow, Ron Howard, Alton Brown and Elvis Costello. International Harry Potter Day 2022: Delhi Police Uses Meme Power to Educate Citizens of COVID-19 Norms.

'Variety' further states, at the time of his initial positive test result, Colbert said on Twitter that he was "feeling fine" and joked that he would "do anything to avoid interviewing Jason Bateman." However, 'The Late Show' has only announced that Colbert was experiencing symptoms, if he has tested positive after contracting the bug remains unclear. In his tweet from April 21, Colbert said he had been "vaxxed and boosted." Colbert reacted to the news that he was embarking on another hiatus in a tweet in which he wrote, "WORST. SEQUEL. EVER (sic)."

(The above story first appeared on LatestLY on May 11, 2022 01:50 PM IST. For more news and updates on politics, world, sports, entertainment and lifestyle, log on to our website latestly.com).