The Witcher Season 2 is a show on Netflix that is based on the Polish novels of the same name. The series stars Henry Cavill, Freya Allen and Anya Chalotra and is streaming on Netflix. 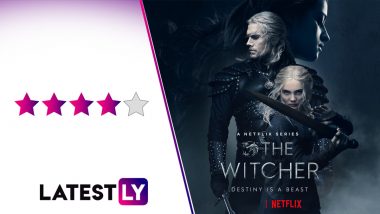 The Witcher Season 2 Review: When the first season of The Witcher came out, fanfare was surely high. I at that point had just played the games but had some knowledge about the books and the lore. Watching the show and Henry Cavill portray Geralt of Rivia, a monster slayer for hire was genuinely the best part about it. But the show ultimately failed to live up to its hype because of how the story was spread out. It was non-linear and oftentimes messy, but I still enjoyed it, and so did the audience. Glad to say those problems don’t persist anymore in the new season. The Witcher Season 2: Release Date, Time, Where to Watch – All You Need to Know About Henry Cavill and Anya Chalotra’s Fantasy Series!

The Witcher Season 2 picks up right after the end of season one. Geralt finds Ciri and is on the way to Kaer Morhen with her. Most of Yennefer’s story is regulated to the aftermath she is dealing with the battle of Sodden Hill. The bulk of the story focuses on Geralt trying to make Ciri an efficient fighter and that’s where the root of our story lies.

Henry Cavill once again is the best part about this show for me. From an acting perspective he has more to do here. In the first season Henry Cavill had to be grumpy for most of the season, here with him being in Kaer Morhen and training Ciri, he has to show much more range. We see him interact with his people and there is this immediate sense of brotherhood among these Witchers and it’s believable for the most part due to Cavill’s performance. Freya Allen as Ciri is also another highlight. Her character development is done really well as you see her transform into a much more confident person by the end of the season. Not to mention her chemistry with Cavill is great and is the heart of this season.

One of the biggest praise perhaps I can give this season of The Witcher is that the story finally feels easier to follow. In the first season it kept jumping from one time period to another. Here the setup is already done, and it makes for much more-easy viewing. The story shines when it just focuses on Geralt and Ciri. The lore building here is also tasteful as you see new monsters and newer concepts are introduced. It truly feels like a unique world of its own where you don’t have to compare it to other medieval fantasy shows.

It’s also surprisingly more action heavy this time around. I had a blast watching Geralt fight a Leshen, a tree monster that uses its roots to kill someone. Think of like a more ruthless version of Groot from Guardians of the Galaxy. That was one fight scene that really stood by me and I just had a blast watching all of it.

With these you can see a sudden step up in production quality and you can see how Netflix wants this to be their next big show. The visuals are particularly impressive. The cinematography feels less like a Guy Ritchie film, something that I noticed due to the over-abundance of Dutch angles in the first season. On a technical level, this was extremely fun. I enjoyed every episode and I got that medieval fantasy fix that I was looking for. Spider-Man No Way Home Movie Review: Tom Holland’s Marvel Film Is a Multiversal Celebration of the Iconic Avenger! (LatestLY Exclusive).

Things start to go a bit awry though whenever the season doesn’t focus on Geralt and Ciri. Yennefer for most of the part is also a very important character, but it’s her story that’s most inconsistent. The antagonists also didn’t do much for me aside from the fact that they were well antagonists. I just wish that in the future seasons concerning the side characters there is a lot more. You get all the politics and betrayal, but just make it a bit more convincing.

Netflix’s The Witcher Season 2 finally feels like it's capitalising on its potential that was missing from season one of the show. With great character development and world building, this season of The Witcher definitely cements itself as a fantasy show to be on the lookout for.

(The above story first appeared on LatestLY on Dec 17, 2021 09:44 PM IST. For more news and updates on politics, world, sports, entertainment and lifestyle, log on to our website latestly.com).