The sixth episode of WandaVision would start streaming from February 12. Expect more craziness to happen in that episode and the three episodes after that! 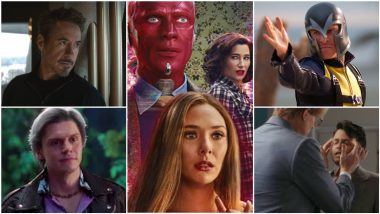 WandaVision is easily becoming the most talked about show of 2021, although it is just five episodes old. Marvel Cinematic Universe's first proper series on Disney+ has been a successful experiment for the studios, with its out-of-the-box treatment, some very smart writing and editing, and the performances of the cast, be it Elizabeth Olsen, Paul Bettany, Kathryn Hahn, Teyonah Parris, Randall Park, and Kat Dennings. WandaVision is directed by  Matt Shakman, known for directing episodes of Fargo, Game of Thrones and It's Always Sunny in Philadelphia. WandaVision Episode 5 Explained: From Wanda Facing Off SWORD to That Awesome X-Men Cameo, 10 Things That Happened in Marvel’s Disney+ Show.

While the first three episodes of WandaVision had left fans hooked with its sitcom tropes and surprise little twists, it's the fourth and the fifth episodes that have created the most excitement. Especially the fifth, that threw in a lot of revelations (Wanda stole Vision's body), baffling questions (Agnes' breaking the scene), badassery (Wanda threatening the SWORD), a huge CAMEO, and some great Easter Eggs.

While we have covered most of them in our recap of the episode, keen Marvel fans have gone back and revisited the episode to observe the finer points and extract even more great Easter eggs from the episode. We have gone to Twitter to handpick some very nices just for you.

Wanda is Messing With Us Too

Bet ya all would once again go back to episodes four and five, to notice this! And then slap your foreheads!

wanda went from thinking she’d die by the missile to stopping the same weapon instantly pic.twitter.com/3E4nNnjuiS

Blame it on X-Men's Decade Jumping!

i think we all forget *technically* Evan Peters WAS quicksilver back in the 80s, in X-Men Apocalypse, which may explain why he portrays her brother in this episode.

Evan Peters was also Quicksilver in Dark Phoenix in the '90s, so expect him to stay in WandaVision's '90s themed episode.

Chalk One for LGBTQ Superheroes!

The LGBTQ+ flag spotted in #WandaVision's newest episode could hint at the sexuality of Billy, a character who is gay in #Marvel comics: https://t.co/PaXeKmhgq0 pic.twitter.com/HTWyVxSmya

Will Billy get to be the first gay male superhero of MCU?

Could Be Awesome If True!

I realized this while watching #WandaVision tonight. Mind. Blown. 🤯📺 pic.twitter.com/sOYjdbfcO7

When cable television was popular in India, weren't the '90s kids also treated to popular yesteryear sitcoms from the West like Bewitched, I Dream of Jeannie, Small Wonder, Different Strokes etc?

An Appreciation Note for Norm!

I was FLOORED by this moment in #WandaVision this week. Incredible acting moment by Asif Ali. This series is so good! pic.twitter.com/gFh4CwOSuF

Asif Ali had also appeared in an episode of Agents of SHIELD as a different character. Or has he? With Manda manipulating reality, who knows!

I was right! They went Family Ties for the 80's episode (complete with an emotional kitchen scene) and ending with the intro of Uncle Zippy for next week's 90's episode. pic.twitter.com/E1xdiLoPWn

The episode had a lot of Easter Eggs to popular '80s sitcoms like Family Ties, Roseanna, Growing Pains etc. The emotional quotient that Vision's bewilderment brought is in line with how these sitcoms also cashed in on sentimentality.

A Smaller Hint About X-Men?

After rewatching #WandaVision I noticed Vision quotes Charles Darwin....the father of evolution....as in homo superior....as in mutants! The Xmen are coming! pic.twitter.com/C38FKMy3uY

Though a better theory would be that Charles Darwin's Theory of Evolution becomes a metaphor for Vision's babies evolving into two age-phases within a few hours.

Interestingly, 1989 is also the birthyear of actress Elizabeth Olson.

I Had This Very Same Question

So how did Monica, Darcy and Woo know about the Endgame battle in DETAIL?! 🤔#WandaVision pic.twitter.com/esTozk1FAe

None of them were anywhere near that battlefield to know so much about what happened there, especially in such detailing.

Who Else Noticed This?

Vision actually threw his food off his shoulder in this credit scene because he can't eat food and I thought it was a hilarious detail 😂 #wandavision pic.twitter.com/C7H5t8PhLT

Pretty sure, everyone was distracted by baby Vision by then!

Did anyone else notice how Agnes’s house looks just like Samantha and Darrin’s? #WandaVision #Bewitched #Agnes 🧹✨Great detail if intentional 😏 pic.twitter.com/oUEbv5NmeT

Fans are speculating that Agnes could be Agatha Harkness, a powerful witch from Marvel comics who was sort of mentor to Scarlet Witch. And since Bewitched is a show about a witch...

There's More To Monica Than What Meets The Eye!

We might be seeing #MonicaRambeau 's Spectrum Superhero origin in #WandaVision !!!!

Also see the detail of her costume on one of the posters pic.twitter.com/2F5oR1jOKE

Also we are still be bothered by her mention of the 'aerospace engineer', who should matter ahead in the future. Is it time to say 'Fantastic'?

A113 Makes The Mandatory Appearance

Anyone else notice the classic Pixar A113 Easter Egg in episode 5 of #WandaVision ? pic.twitter.com/iarJmFHskN

Keep your eyes peeled. There could be a Stan Lee tribute as well.

@eavoss I saw someone else talk about this on twitter but WOW this! How did they get Stark tech that’s a missile launching drone and who would send that to be used? That’s a crazy Easter egg 😯 #Wandavision pic.twitter.com/S3fcsKvyHg

But once again, a cool Age of Ultron callback, since it was a missile made in Stark Industries that destroyed Wanda's house and killed her parents.

Sparky Fans Would Have Spotted This

Too bad the dog didn't survive the episode, though in the comics, he was brought back to life as a robot by Vision.

magneto in wanda in

Everyone Who Had Seen Captain America: Civil War Would Have Got This

WANDA STILL TRAUMATISED BY HER GUILT OVER LAGOS IN CIVIL WAR pic.twitter.com/Y3z13cfPLW

Which means that the guilt of killing so many innocent people still haunts Wanda, that could also be a trigger to what she has done with Westview.

what if wanda makes all the clothes in there bulletproof because of pietro pic.twitter.com/ZqVe2aICV0

In Age of Ultron, Pietro was killed by bullet injuries. So that makes this Easter Egg very morbid, but sentimental too!

so wanda beat up thanos, changed for the funeral, stole vision's body in her funeral clothes and has been wearing her suit the whole time in her reality? pic.twitter.com/xP0Fon3XGz

Strangely after Tony Stark's funeral, when Wanda was talking Hawkeye over losing Vision and Black Widow, she appears to have come at peace with this tragedy. So what happened in between.

The sixth episode of WandaVision would start streaming from February 12. Expect more craziness to happen in that episode and the three episodes after that!

(The above story first appeared on LatestLY on Feb 10, 2021 11:17 PM IST. For more news and updates on politics, world, sports, entertainment and lifestyle, log on to our website latestly.com).