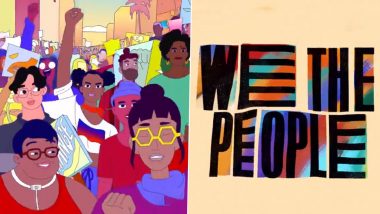 Barack and Michelle Obama are reuniting with TV screenwriter and producer Chris Nee, with their Higher Ground Productions for the Netflix animated series 'We the People'. According to Deadline, Nee's 10-episode series, also executive produced by Kenya Barris through his Khalabo Ink Society banner, combines music and animation to educate a new generation of young Americans about the power of the people. Barack Obama 59th Birthday: Five Interesting Facts About The Former US President.

With three-minute installments, 'We the People' is a series of animated music videos that cover a range of basic U.S. civics lessons in not-so-basic ways. The series features original songs performed by artists including H.E.R., Janelle Monae, Brandi Carlile, Lin-Manuel Miranda, Adam Lambert, Cordae, Bebe Rexha, KYLE, Andra Day and poet Amanda Gorman. Each episode, which utilizes a mix of animated styles, is a call to action to rethink civics as a living, breathing thing and reframe the understanding of what government and citizenship mean in a modern world. Barack Obama, Bill Clinton & George Bush to Volunteer to Get COVID-19 Vaccine Dose on Camera to Promote Vaccine's Safety.

Michelle and I are excited to share our latest show from Higher Ground: We The People. Some of our favorite artists got together with amazing animators to remix civics—and the result is a lot better than what we had in school. Check it out on @Netflix this July 4. pic.twitter.com/PlsSyq5pgk

Nee, who previously teamed with Higher Ground for a Netflix preschool series, executive produces under for Laughing Wild. In addition to Barack and Michelle Obama, Tonia Davis and Priya Swaminathan executive produce for Higher Ground. Ada Chiaghana, Erynn Sampson and PeeDee Shindell will also produce. As per Deadline, 'We The People', which will land on Netflix on July 4, is directed by Peter Ramsey, Trisha Gum, Victoria Vincent, Benjy Brooke, Mabel Ye, Tim Rauch, Jorge R. Gutierrez, Daron Nefcy, Everett Downing and Kendra Ryan. The series will make its world debut at AFI DOCS on June 24.