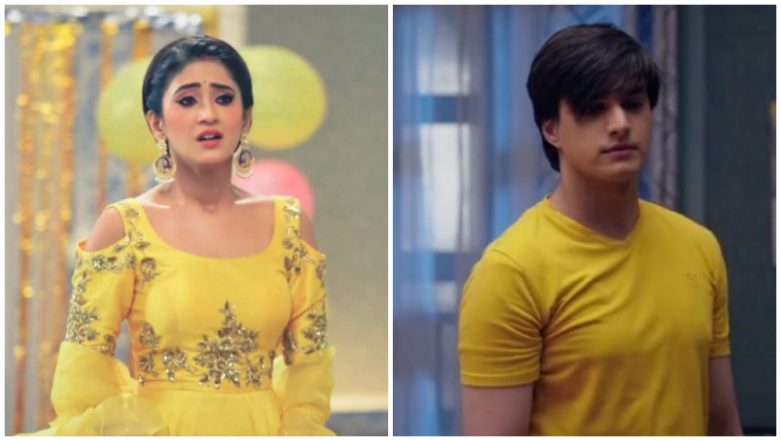 Today’s episode of Yeh Rishta Kya Kehlata Hai starts with Kirti telling everyone to write one wish on a paper and then they will keep the chits in front of God. Kartik (Mohsin Khan) writes that whatever losses Goenkas have suffered should be recovered and Naira (Shivangi Joshi) writes that whatever misunderstanding happened between Kartik and her, should be cleared soon and it should never happen again. Next day, everyone in the Goenka house get tensed as to how come the jewellery did not reach the client, Akhilesh calls his men to find out where is the van in which all the jewellery is there. Manish is stressed as what will they do now. Naira gets Mihir’s call and she tells him she will call later. Kartik tells Naira that she should not tell about this to  Mihir, Naira says why will she tell him, Kartik says he does not know anything but this news should not go out. Kartik tells that he will go to the same route to see what happened, Naira also joins him. Yeh Rishta Kya Kehlata Hai May 20, 2019 Written Update Full Episode: Naira’s Special Gift Creates Rift in Kartik’s Relationship With His Wife

While Kartik and Naira are going, Naira messages Mihir that she will take little time to come to the office as she has some urgent work. Kartik gets a call from Karan Singh, who asks what is this going on and how come the jewellery is stolen. He asks Kartik if he did some mistake or the jewellery was not ready and warns Kartik that if anything wrong happens then he will not leave him. Kartik tries to make him understand that everything will be fine. Seeing Kartik in tension, Naira makes him calm and tells he should not worry. Shivangi Joshi Aka Naira of YRKKH Turns 21: Seven Photos That Prove Birthday Girl Is Queen of Ethnic Wear!

Meanwhile, Sahil calls Kartik and tells that his friend who is an ACP and is told him that a van accident happened near the airport and tells him to go and enquire. Kartik and Naira reach the spot and see the van burning and go near it. Seeing the police Kartik asks them if they can go and see it. Kartik and Naira see that all the jewellery is stolen, Kartik gets upset seeing this. Hearing this news all are worrying at the Goenka house as to what will they do now. Just then Akhilesh gets a call from the secretary of Karan Singh and tells them that they want their money back with interest and tells that the Sindhyas are going to take jewellery from Mihir which has been designed by Naira. Sahil suspects  Mihir to be behind the theft and Kartik gets angry hearing all this. Manish tells maybe some rival of them did this, but Akhilesh says that then Mihir might have done it as the Sindhyas' first choice was him only. Sahil says maybe he used Naira against them. Naira comes and hears all this and gets upset.

In the precap, Kartik is furious and gets angry with Naira and tells her not to worry about him and continue her work with Mihir.