The murder case was reported last afternoon when a 35-year-old woman was found dead with her throat slit on a street in the Delhi Cantonment area. 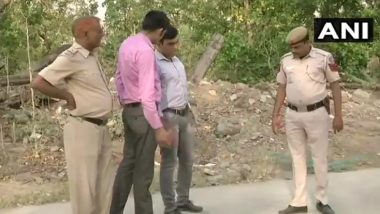 The murder case was reported last afternoon when a 35-year-old woman was found dead with her throat slit on a street in the Delhi Cantonment area | (Photo Credits: ANI)

Meerut, June 24: A day after the murder of an Army Major's wife in the national capital, another officer was arrested by the police in Uttar Pradesh's Meerut for his alleged role in the killing.

The apprehended officer has been identified as Major Nikhil Handa. He was nabbed from Meerut's Daurala earlier in the day and has been taken into custody by the Delhi Police.

The murder case was reported last afternoon when a 35-year-old woman was found dead with her throat slit on a street in the Delhi Cantonment area. Her face was run-over by a vehicle, reports said.

Photo of Indian Army Major Nikhil Handa who was arrested in Meerut's Daurala earlier today. He is accused of murdering wife of another Indian Army major, who was found dead with her throat slit in Delhi's Brar Square yesterday pic.twitter.com/Jo9wciI6pu

A police official privy to the investigation so far told reporters that the suspected killers arrived at the spot using their own vehicle, and fled from the scene after executing the crime. "Details, however, would be confirmed after we scrutinise the CCTV footage," he said.

The deceased has been identified as Shailja Dwivedi, wife of Major Amit Dwivedi. The duo resided in west Delhi's Army Headquarters. She is also survived by a six-year-old son.

Details of the murder case emerging so far

Shailaja had left her house last at 10am to attend a psychotherapy session at the Army's Research and Referral (RR) Hospital. The driver dropped her in the official car and returned at the Army quarters in west Delhi.

At 1:30pm, a call was made to police control room (PCR) alerting them of a body being found on an isolated stretch of road leading to the Railway Protection Force Mess near Brar Square, which also close to the Delhi Cantonment Metro Station.

Initially, the police suspected a case of road accident. However, the woman's body was found with slit throat and face run-over by a vehicle, which indicated a case of targeted killing.

As part of the preliminary probe, the police is analysing the CCTV footage and the call detail records of Shailja.

(The above story first appeared on LatestLY on Jun 24, 2018 02:17 PM IST. For more news and updates on politics, world, sports, entertainment and lifestyle, log on to our website latestly.com).