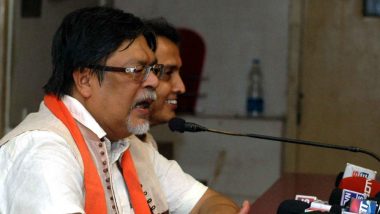 Chandan Mitra, a former Rajya Sabha MP, resigned from the BJP on July 18. Mitra, Editor and Managing Director of The Pioneer newspaper, was nominated as a member of the Rajya Sabha in August 2003. He was elected to another term in the Upper House as a Bharatiya Janata Party MP from Madhya Pradesh in June 2010.

Sabina Yasmin, former Minister of State for Labour in the West Bengal government, is an MLA elected from the Mothabari constituency. She was the first Muslim woman to be a minister in West Bengal. Former Rajya Sabha member and CPM leader Moinul Hasan quit the party on July 7. He was associated with the CPM for 42 years.

(The above story first appeared on LatestLY on Jul 21, 2018 02:04 PM IST. For more news and updates on politics, world, sports, entertainment and lifestyle, log on to our website latestly.com).