Prince Kumar, the son of a DTC bus driver, topped the CBSE Class 12 examination in the science stream. 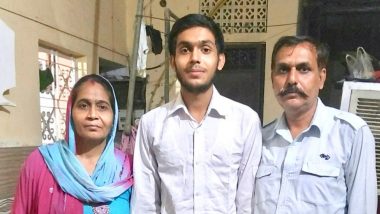 New Delhi, May 26: Prince Kumar, the son of a DTC bus driver, topped the CBSE Class 12 examination in the science stream. Deputy Chief Minister Manish Sisodia congratulated Kumar and said that it was a "very proud moment" for him. "Very proud moment, just congratulated Prince Kumar, topper of Delhi Govt school, Science stream in Class 12, Son of a DTC bus driver has got 97% with 100/100 in Maths, 99/100 Eco, 98/100 in Chemistry (sic)," Sisodia tweeted.

"It was also touching moment to speak to Prachi Prakash and her family, topper of Delhi Govt school, Commerce stream in Class 12. Daughter of a small private company executive, Prachi got 96.2% with 100/100 in Eco, 99/100 in Math," Sisodia, who also holds the education portfolio, said in another tweet.

Sisodia also highlighted the performance of Delhi students in Class 12 results and pointed that 168 government schools achieved 100 per cent results, against 112 of last year.

The CBSE Class 12 results were announced today. The overall pass percentage was 83.01 per cent as against last year's 82.02 per cent.

A total of 638 government schools achieved 90 per cent and above results, against 554 schools last year, he said in a series of tweets.