A plumber died after inhaling toxic gases while trying to clear blockage in a drainage pipeline at Telangana's Rajiv Gandhi International Airport. 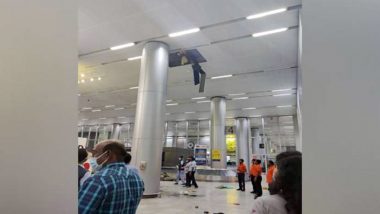 According to police, the incident occurred on Thursday evening in the arrival area of the airport.  Jharkhand: 3 Die in Latehar District After Inhaling Toxic Gas in Well

They had climbed over the ceiling with the help of a ladder and poured acid into drainage pipes to clear the blockage.

The workers fell ill after inhaling toxic fumes and were rushed to Apollo emergency care facility at the airport. One of them died while two others are reported to be okay.

The deceased has been identified as 42-year-old Narasimha Reddy who worked for Faber Sindoori Facility Management Services, an annual maintenance contract agency for the passenger terminal building.

His body has been shifted to the government-run Gandhi Hospital for autopsy.

(The above story first appeared on LatestLY on Jun 18, 2021 06:21 PM IST. For more news and updates on politics, world, sports, entertainment and lifestyle, log on to our website latestly.com).