Madhya Pradesh Home Minister Narottam Mishra on Wednesday warned to impose a ban on the film 'Kaali' if the objectionable posters showing the Goddess smoking a cigarette are not removed. 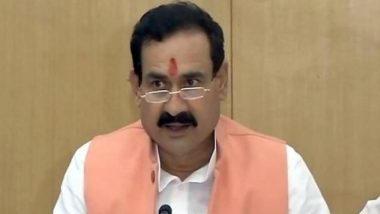 Bhopal, July 6: Madhya Pradesh Home Minister Narottam Mishra on Wednesday warned to impose a ban on the film 'Kaali' if the objectionable posters showing the Goddess smoking a cigarette are not removed.

Calling it an insult of Goddess Kaali, the minister also said that if posters were not removed, the government will lodge an FIR against the film's director. Kaali Movie Poster Controversy: Canadian MP Chandra Arya Says Anti-Hindu, Anti-India Groups Active in Canada

An infuriated minister further said that filmmakers find it easy to insult Hindu Gods and Goddess but not any other religion because they know that they will be punished. "It is a well planned conspiracy against Hindus, he added.

The poster of the performance documentary Kaali showed the Goddess smoking a cigarette and holding a LGBTQ flag.

Madurai-born filmmaker based in Toronto in Canada Leena Manimekalai came under sharp criticism after she shared the poster of 'Kaali' on Twitter allegedly depicting the goddess in a "disrespectful" manner.

The poster of the movie has evoked sharp reactions on social media with some people alleging that it hurt their religious sentiments and demanding the arrest of the filmmaker.

Amid the immense backlash, the director had said she was willing to pay with her life and added that she had nothing to lose.

(The above story first appeared on LatestLY on Jul 06, 2022 12:37 PM IST. For more news and updates on politics, world, sports, entertainment and lifestyle, log on to our website latestly.com).