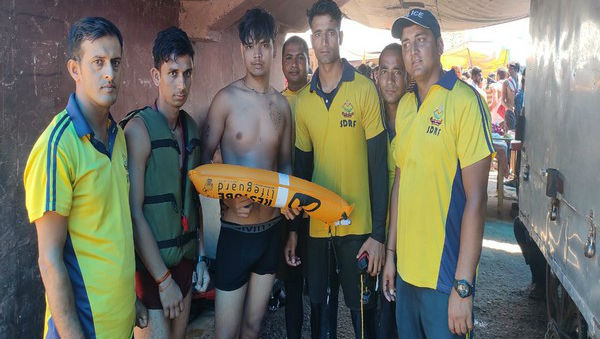 Haridwar, July 29: State Disaster Response Force (SDRF) rescued a Kanwariya from drowning in Kangra Ghat in Haridwar at around 11:25 am on Monday. The Kanwariya was trying to swim through the Pantdip Ghat but the strong tides in the water swept him away towards the Kangra Ghat. He was about to drown but was saved due to the diligence of an SDRF official, Aashiq Ali who jumped into the river to save him.  Kanwar Yatra 2019: Four Brothers Carrying Parents on Their Shoulders Reach Shamli After Covering 130 Km.

The SDRF official had to struggle in the water but by using a manual restube, he successfully managed to get the Kanwariya out of the water without any injuries. The Kanwariya has been identified as Rahul (20) who belongs to Delhi and was on a pilgrim yatra to Haridwar.

About 3.30 crore pilgrims have reached Haridwar as part of the ongoing Kanwar Yatra. The Kanwar Yatra is an annual pilgrimage of Lord Shiva's devotees, which had started this year on July 23.

Every year, around this time of the year, scores of these devotees from across India, often wearing orange-coloured clothes with decorated pots on their shoulders, undertake the pilgrimage, called Kanwar Yatra, on foot during Saavan- a month in the Hindu calendar. Kanwariyas Exempted From 'No Helmet, No Fuel' Rule in UP's Gautam Buddh Nagar, Says Report.

These pilgrims, majority of who are young men, visit Haridwar, Gaumukh, and Gangotri in Uttarakhand and Sultanganj in Bihar to fetch waters of River Ganga.

Later, the holy water is dispensed as offerings to Lord Shiva in temples. The Uttarakhand government had already announced that all schools and colleges in Haridwar would remain closed from July 23 to July 30.