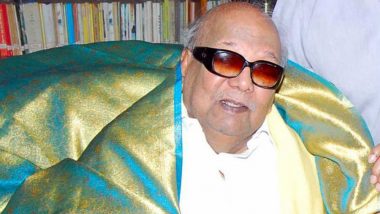 Even two years after his demise, Muthuvel Karunanidhi continues to remain a household name in Tamil Nadu. His persona was undetachable from the state's polity. Not only was he the longest serving Chief Minister of Tamil Nadu, but also a celebrated scholar and artist of the state. His creativity and intellectual prowess earned him the title of "Kalaignar". Om his 97th birth anniversary, here are the lesser known facts about M Karunanidhi.

Karunanidhi led the DMK for a period of nearly 50 years - from 1969 to his demise in 2018. He was continuously elected as president of the pro-Dravidian party for 10 times. He died at the age of 94 following age-related ailments. His son MK Stalin, who was apparently chosen as the political heir by Kalaignar, was elected as the next party chief.

(The above story first appeared on LatestLY on Jun 03, 2020 07:00 AM IST. For more news and updates on politics, world, sports, entertainment and lifestyle, log on to our website latestly.com).