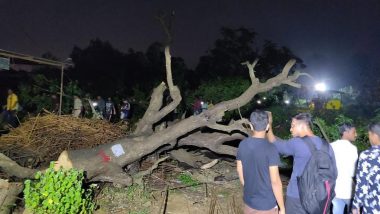 Mumbai, September 30: Maharashtra Chief Minister Uddhav Thackeray on Wednesday directed the state home department to immediately start the procedure to withdraw cases registered against citizens who had protested against felling of trees for the construction of the proposed metro car-shed in Mumbai's Aarey Colony. Days after taking charge as chief minister in November last year, Uddhav Thackeray had assured the cases against Aarey activists would be withdrawn.

Of them, 29 protesters, including six women, were arrested when some of them allegedly tried to obstruct the police personnel at Aarey Colony from discharging their duty and manhandling them. A sessions court had on October 6, 2019, granted conditional bail to 29 protesters.

(The above story first appeared on LatestLY on Sep 30, 2020 07:56 PM IST. For more news and updates on politics, world, sports, entertainment and lifestyle, log on to our website latestly.com).