'After Full Roll Out of NEP, Class 10 and 12 Board Exams Should Discontinue', Says Delhi Deputy CM Manish Sisodia 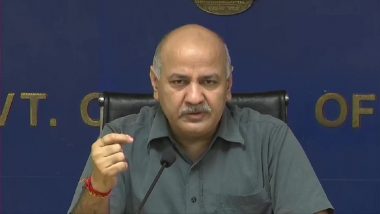 Concurring with Union Education Minister on “transformative value of NEP 2020”, Sisodia added that “transformation should be holistic and not piecemeal”.  Elaborating the point, he said that “it is about time that we introduce muti-year stage wise classes and external assessment at the end of each stage replacing the existing year wise classes and two board exams in 10th and 12th. Delhi Deputy CM Manish Sisodia Says Online Education Not Substitute for School Education, to Keep the Learning Process Moving.

Sisodia pointed that 5+3+3+4 model recommended in the NEP can attain its full potential if the existing one year per grade system is removed. It means, instead of existing class system where all children of a class move together in all subjects despite being at different learning levels, multi-year stage will help child move as per their learning need in different subjects at their own pace. He added that a stage-wise curriculum with a clearly stated learning goal in terms of knowledge, skills and values be created.

Going by the logic of the stage, Sisodia said that after the full roll out of NEP, class 10 and 12 board exam should also discontinue. The existing board exams made sense in 10+2 model but not in 5+3+3+4. Retaining the two board exams in one last stage will dilute the significance of first three stages in the school life of children.

Further, when the mandate of the National Testing Agency (NTA) is to conduct entrance exams for admissions in higher education institutions, there is no need for class 12 board exams. Hence, class 12 board exam should not be a high stake exam anymore.

On the current academic session, which is seriously disturbed due to ongoing Corona crises, Sisodia said that the syllabus on all classes be reduced to 50% because of the continued loss of school days. He also suggested that next year’s entrance exams like JEE, NEET should also be based on this reduced syllabus to align with the current year’s class syllabus.

Sisodia also suggested that CBSE should not hold class 12 board exams before May 2021 so that students get some more time to study. Generally, the exams are held in February and March. The Union Education Minister Dr. Ramesh Pokhriyal “Nishank” who chaired the online meeting, asked the officials to consider Sisodia’s suggestions.

Sisodia also expressed his gratitude to all the teachers across the country for leading the relief efforts of the governments from the front. He said our teachers are the real heroes in these difficult times.

With schools shut during the pandemic, Sisodia said, “The teachers of Delhi played an important role during this extremely difficult period.” He added that these teachers found new and innovative ways of finding children who were unable to join the online classes. Shri Sisodia praised such teachers for their grit and dedication.