Delhi Police has issued show cause notice to Hyatt Regency asking them about the delay in informing the police about the incident of ex-Bahujan Samaj Party (BSP) MP Rakesh Pandey’s son brandishing a gun outside the hotel. 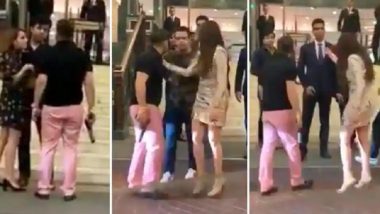 New Delhi, October 16: After a video of Ashish Pandey brandishing a gun outside Hyatt Regency in Delhi went viral on social media, Delhi police has issued a show cause notice to the hotel asking them about the delay in informing the police about the incident. Pandey is a son of ex-Bahujan Samaj Party (BSP) MP Rakesh Pandey. One person who was with the accused, Ashish Pandey at the time of the incident was interrogated. The police have also collected the details of Arms License of Pandey. The process has also been initiated to cancel the license.

The police have also asked the hotel authorities as to why their lodging license should not be cancelled in light of the incident. As per the Delhi police, it took suo motu cognisance of the video and after verification from Hyatt Regency a case was registered against the accused. Border check post has been put on alert along Uttar Pradesh-Nepal border, and lookout circular has been opened in all airports in the country. Delhi police also registered a case under the Arms Act and sections 323 (causing hurt), section 506 (criminal intimidation) 354 (using force with the intent to outrage the modesty of a woman).

Police has issued show cause notice to Hyatt Regency asking them why there was a delay in informing the police about the incident. One person who was with the accused at the time of incident was interrogated: Delhi Police https://t.co/rMbN8NWZeZ

Delhi Police issues a show cause notice to hotel Hyatt Regency asking why their lodging license should not be cancelled in light of the incident where Aashish Pandey, son of former BSP MP Rakesh Pandey, was seen brandishing a gun on October 14. pic.twitter.com/PCbJhcbaxD

In the video, the accused wearing a black t-shirt and a pair of pink trousers can be seen holding a gun in his right hand and arguing with a couple. Pandey was arguing with the couple over a parking issue. Hyatt Regency in Delhi has also issued a statement talking about how safety is of prime importance and with regards to this particular case, they will cooperate with the Police and extend all possible help.

(The above story first appeared on LatestLY on Oct 16, 2018 10:41 PM IST. For more news and updates on politics, world, sports, entertainment and lifestyle, log on to our website latestly.com).