In the video going viral, the man is seen wearing a black t-shirt and a pair of pink trousers. 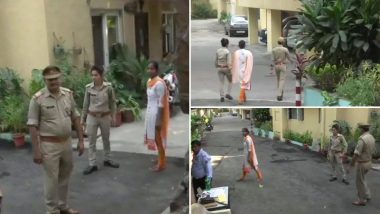 Delhi, October 16: A video of a man brandishing a gun outside a five-star hotel, identified as Hyatt Regency in Delhi, went viral on social media. The man is Ashish Pandey, son of former BSP MP Rakesh Pandey. A case has been registered in connection with the incident under the Arms Act.

According to an ANI update, Lucknow Police has arrived at the residence of Pandey, Look Out Circular (LOC) issued by Delhi Police against him, for moving with a gun outside a 5-star hotel. Police have further alerted airports and others to keep an eye for the culprit. Man Identified as Former BSP MP's Son Seen Brandishing Gun Outside Five-Star Hotel in Delhi; Watch Video.

Lucknow police arrives at the residence of Ashish Pandey, son of former BSP MP Rakesh Pandey, who was seen brandishing a gun outside a 5-star hotel in Delhi on October 14. pic.twitter.com/6FR1xsMM1z

Hyatt Regency in Delhi has also issued a statement talking about how safety is of prime importance and with regards to this particular case, they will cooperate with the Police and extend all possible help.

The safety & security of our guests is our primary concern. We take the incident seriously & have been working with the local police authorities on the same: Hyatt Regency Delhi on Ashish Pandey, son of former BSP MP Rakesh Pandey, seen brandishing a gun outside the hotel pic.twitter.com/HxtVz35UIg

In the video going viral, the man is seen wearing a black t-shirt and a pair of pink trousers. He can be seen holding a gun in his right hand and arguing with a couple. Reports say that the man was arguing with the couple over a parking issue.

(The above story first appeared on LatestLY on Oct 16, 2018 02:46 PM IST. For more news and updates on politics, world, sports, entertainment and lifestyle, log on to our website latestly.com).