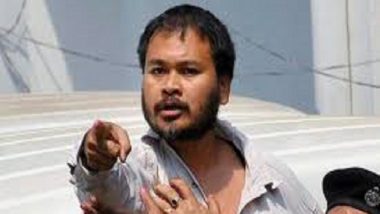 New Delhi, July 11: Jailed Assam activist Akhil Gogoi was tested positive for coronavirus, an official confirmed on Saturday. The confirmation came a day after he was declared negative while two of his associates - who are lodged in prison - were found to have contracted the contagious disease. Assam Police Earlier Denied Reports Claiming That Gogoi is COVID-19 Positive.

Gogoi, 44, is expected to be admitted to the Gauhati Medical College which has been designated as a COVID-19 facility. His two aides - Dharjya Konwar and Bitu Sonowal - were taken to the hospital on Friday after the test results confirmed them as coronavirus positive.

Gogoi heads the Krishak Mukti Sangram Samiti (KMSS) - an organisation committed to the cause of farmers in Assam. Konwar and Sonowal are also functionaries of the same outfit.

The trio were held in December last year for their alleged role in flaring up the anti-CAA protests. The state of Assam had witnessed raging demonstrations against the law which mandated citizenship to non-Muslim refugees from Pakistan, Afghanistan and Bangladesh.

(The above story first appeared on LatestLY on Jul 11, 2020 08:54 PM IST. For more news and updates on politics, world, sports, entertainment and lifestyle, log on to our website latestly.com).