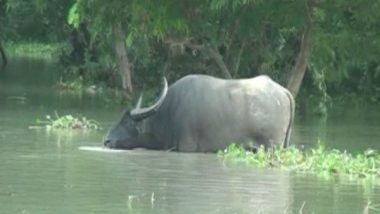 Guwahati, August 5: Even as the flood situation in Assam improved significantly since July 24, 50 per cent of the world-famous Kaziranga National Park is still inundated, with 18 rhinos and 135 wild animals dying due to the deluge till date, officials said on Wednesday. Kaziranga Park Director Karmashree P. Sivakumar said that 172 wild animals have been rescued so far from floodwater, even though over 95 per cent of the park remained inundated until July 23.

"Last year, 263 animals, including many endangered rhinos, were killed in flood while 169 animals were rescued... all-out efforts are being made to take care of the animals in the entire Kaziranga National Park," Sivakumar told IANS over phone. The animals that perished this year include 18 rhinos, 107 hog deer, 12 wild boars, six wild buffaloes, four porcupines and three swamp deer. Assam Floods Update: Over 5 Million People Affected in 30 Districts, Death Toll Rises to 109.

The 172 rescued animals include three rhinos, 120 hog deer, 31 pythons and four cobras. Meanwhile, Britain's Prince William and his wife Kate have expressed deep concern over the devastation by flood in Assam for over a month that killed 111 men, women and children in 22 districts, while 26 others were killed in landslides since May 22. Anushka Sharma, Virat Kohli Urge People to Donate for Assam, Bihar Flood Relief.

The British royals, known formally as the Duke and Duchess of Cambridge, in a letter to Sivakumar have expressed their distress over the huge damage to the park sprawled over 884 sq km and its precious wildlife. The couple, who had visited the park in April 2016 to learn about conservation and anti-poaching efforts, said in their letter: "The deaths of so many animals, including one-horned rhinos, are deeply upsetting.

"The loss of life and livelihood in Assam as a result of the flooding, coming on top of the Covid-19 pandemic, is deeply distressing." Forest officials said that not only the Kaziranga National Park, located on the edge of the eastern Himalayan biodiversity hotspots of Golaghat and Nagaon districts, but the Manas, R.G. Orang and Tinsukia national parks, and the Pabitora and Tinsukia wildlife sanctuaries were also affected by floodwater that led to death of many wild animals there.

Of the 223 camps of forest personnel guarding the park, three were still inundated as of Wednesday despite receding floodwater. Around 1.43 lakh people in 270 villages in 15 districts are still in distress even as the situation in Assam has improved hugely in the past two weeks due to a let-up in the monsoon.

(The above story first appeared on LatestLY on Aug 05, 2020 10:01 PM IST. For more news and updates on politics, world, sports, entertainment and lifestyle, log on to our website latestly.com).