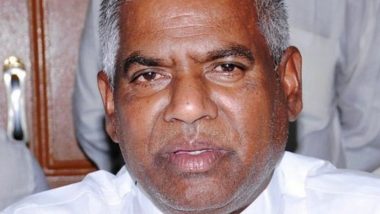 Rao was admitted to a hospital in Bidar after he contracted COVID-19. On September 1, he was shifted to the Manipal hospital in Bengaluru. His health condition deteriorated in the last few days. He was admitted to the ICU as his oxygen levels dropped on Tuesday night. He was put on life support on Wednesday after he suffered a multi-organ failure. Karnataka Congress President DK Shivakumar condoled Rao's demise. Suresh Angadi Dies of COVID-19; Union MoS Was Hospitalised at Delhi AIIMS.

Shivakumar tweeted: "Deeply saddened to hear about the unfortunate demise of our Basavakalyan MLA Shri. B Narayan Rao due to Covid-19. He was a committed Congress leader who was known for his simplicity & service to the poor. Heartfelt condolences to his bereaved family in this time of grief (sic)." Rao, a first-time MLA from Basavakalyan, defeated Mallikarjun Khuba of Bharatiya Janata Party (BJP) and PGR Scindia of Janata Dal (Secular) in the 2018 assembly elections.

Last week, Ashok Gasti, the BJP's newly-elected Rajya Sabha member from Karnataka, died of COVID-19. The 55-year-old was diagnosed with severe COVID-19 pneumonia and admitted to Manipal Hospital on the Old Airport Road on September 2. What made his condition worse was multi-organ failure. Gasti was on life support when he passed away.

(The above story first appeared on LatestLY on Sep 24, 2020 04:39 PM IST. For more news and updates on politics, world, sports, entertainment and lifestyle, log on to our website latestly.com).