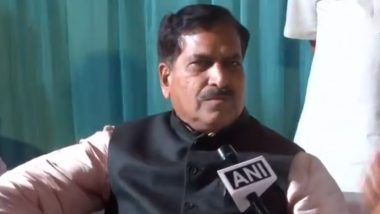 New Delhi, September 23: Suresh Angadi, a senior Bharatiya Janata Party (BJP) leader and Union Minister of State for Railways, died on Wednesday. The parliamentarian breathed his last at the All India Institute of Medical Sciences (AIIMS) in the national capital, where he was admitted earlier this month after being diagnosed with COVID-19. Ashok Gasti Dies at 55, BJP's Rajya Sabha MP Loses Battle Against COVID-19.

Angadi is the first Union MoS in India to die of the contagious disease. His death comes less than a week after Ashok Gasti, another lawmaker of the BJP from Karnataka, died of COVID-19. The 55-year-old had succumbed to the disease on September 17. PM Narendra Modi, G Parameshwara, Other Leaders React to Suresh Angadi's Death.

#BREAKING: Union Minister of State for Railways #SureshAngadi succumbs to Covid-19 at AIIMS.

He is the second parliament member to have succumbed to Covid-19 from Karnataka. pic.twitter.com/ZQNl1XXgOx

Angadi, 65, is a four-time Member of Parliament representing the Belagavi constituency of Karnataka. He was elected consecutively on the BJP ticket in the 2004, 2009, 2014 and 2019 general elections. The late MP was also born in the region of Belagavi, in Belgaum Taluka.

Ahead of the Pariliament's Monsoon Session, he was tested positive for coronavirus but reported to be asymptomatic. His condition deteriorated last week, after he reported breathing issues. Angadi was being treated by a team of medics at the AIIMS in Delhi. However, he could not recover from the lethal disease.

(The above story first appeared on LatestLY on Sep 23, 2020 09:07 PM IST. For more news and updates on politics, world, sports, entertainment and lifestyle, log on to our website latestly.com).