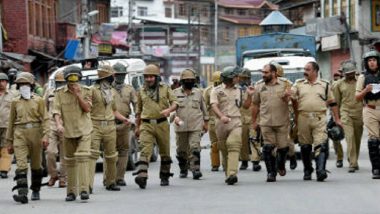 Srinagar, September 23: A block development council member was shot dead by militants on Wednesday in Jammu and Kashmir's Budgam district, police said. Bhupinder Singh, a member of the block development council of Khag block in Budgam district, was shot at by the ultras in his ancestral village Dalwash at 1945 hours, a police official said. He died on the spot. Pakistan Violates Ceasefire in Shahpur, Kirni and Qasba Sectors Along LoC at Jammu and Kashmir's Poonch District.

The police official said Singh, who was given two PSOs for personal security, had dropped the security personnel at Khag police station and proceeded towards his house at Aloochibagh here.

However, without informing the police he went to his ancestral village where he was attacked by the militants, the official added.

"Very sorry to hear about the assassination of BDC councillor Bhupinder Singh. Mainstream grassroot political workers are easy targets for militants and unfortunately in recent years the threat to them has only increased. My condolences to his family. May his soul rest in peace," Omar tweeted.

"Deeply anguished by the news of brutal assassination of BDC Chairman Khag Budgam Bhupinder Singh. Not a day goes by when Kashmiri blood is not spilt. Deaths of despair are a constant fixture in our daily lives," the PDP tweeted.