Beating Retreat Ceremony 2022 To Take Place On January 29; Know History, Timings Of The Event And How To Get Tickets

India celebrated its 73rd Republic Day on Wednesday. Republic Day festivities come to an end with the Beating Retreat Ceremony. It is held every year on January 29. This year, it will take place on Saturday. The event will bring the curtains down on the week-long Republic Day celebrations. 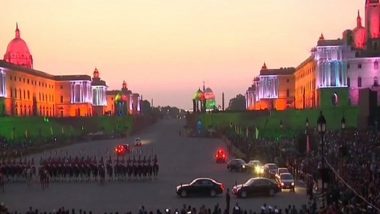 New Delhi, January 29: India celebrated its 73rd Republic Day on Wednesday. Republic Day festivities come to an end with the Beating Retreat Ceremony. It is held every year on January 29. This year, it will take place on Saturday. The event will bring the curtains down on the week-long Republic Day celebrations. This year's ceremony will conclude with "Sare Jahan Se Acha" as one of Mahatma Gandhi's favourite Christian hymns, "Abide With Me" has been dropped from the ceremony.

Earlier, the Beating Retreat used to end with the "Abide With Me" hymn. According to a brochure released by the Indian Army on January 22. "Abide With Me", written by Scottish Anglican poet and hymnologist Henry Francis Lyte in 1847, has been part of the Beating Retreat ceremony since 1950. The brochure also listed 26 tunes that will be played at this year's ceremony at Vijay Chowk. Republic Day 2022 Images & Gantantra Diwas HD Wallpapers for Free Download Online: Wish Happy 73rd Republic Day on 26 January With Jai Hind Messages, GIFs and Greetings.

History Of Beating The Retreat Ceremony:

Beating Retreat ceremony official denotes the end of the Republic Day celebrations. It is conducted on the evening of January 29, the third day after Republic Day. The event is organised by the Ministry of Defence. The bands of the Indian Army, Indian Navy and Indian Air Force perform at the ceremony. The event was started in 1955, and ever since, it has become a hallmark of Republic Day celebrations. Brigadier Bewoor and Major Roberts of Ceremonial and Welfare Directorate of the Indian Army conceived the first Beating Retreat in India.

When Will Beating Retreat Ceremony Be Conducted?

The Beating Retreat ceremony is conducted every year on January 29 evening at Vijay Chowk. The ceremony is graced by the President. The lowering of flags at dusk against the backdrop of the setting sun is followed by lighting up of the Rashtrapati Bhavan, North Block, South Block and Parliament House in unison. Beating Retreat Ceremony 2022: Drones Form Outline of National War Memorial During Rehearsal for Ceremony (Watch Video).

Where To Get Tickets Of The Ceremony?

Visitors need to follow COVID-19 guidelines for attending the ceremony. For getting the tickets, people need to provide photo ID proof issued by the Central or State government. The Beating Retreat rehearsal will be held on January 28.

A total of 1,000 drones will light up the sky during the Beating retreat ceremony. Drones will fly in synchronisation with background music. A laser "projection mapping" show will also take place during the event. The 26 tunes that will be played at this year's ceremony include 'Hey Kanchha', 'Channa Bilauri', 'Jai Janam Bhumi', 'Nritya Sarita', 'Vijay Josh', 'Kesaria Banna', 'Veer Siachen', 'Hathroi', 'Vijay Ghosh', 'Ladaakoo', 'Swadeshi', 'Amar Chattan', 'Golden Arrows' and 'Swarn Jayanti', according to the brochure.

(The above story first appeared on LatestLY on Jan 27, 2022 12:02 PM IST. For more news and updates on politics, world, sports, entertainment and lifestyle, log on to our website latestly.com).