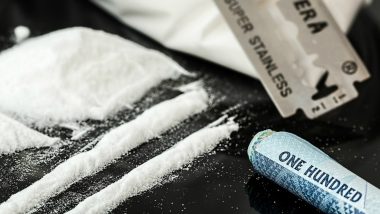 Bengaluru, June 18: In a bizarre case, a woman was arrested at Bengaluru's Kempegowda International Airport (KIA) for trying to smuggle drugs to Doha, the capital city of Qatar. She was nabbed on Saturday from airport's parking lot with contraband concealed in sanitary pads, reported the Times of India. She was scheduled to fly to Doha on the same day. Drug Peddlers Try To Smuggle Khat Leaves As Green Tea; Get Caught By Directorate of Revenue Intelligence.

The woman was accompanied by three others. During the interrogation, the Narcotics Control Bureau (NCB) officials were led to two kingpins of drug smuggling racket. The honcho, identified as Mohammed and Abu were running the India-Qatar drug smuggling racket with their base in Bengaluru. From their hideout, NCB officials recovered drugs like methamphetamine and hashish. The total value of confiscated drugs is nearly Rs 3 crores. Delhi: 2 Drug Peddlers Arrested, 30 KG of Cannabis Seized.

According to a report in The Times of India, the drug dealers identified that the woman was scheduled to fly to Doha with a rucksack and recruited her to smuggle the drugs. The sleuths promised her good remuneration and free travel. After the NCB authorities received a tip-off they began a probe and finally zeroed down the gang on Saturday morning.

Interrogating the trio led to a residence in Linden Street, Austin Town, from where Kingpins were booked, reported TOI. Police recovered 9 kg of Ganja, 13.6 kg of hard hashish, 2.8 kg of hashish oil and 330 gm of methamphetamine from the house they had rented four months ago. The six nabbed were reprimanded in judicial custody on Monday. Further investigation is underway.

(The above story first appeared on LatestLY on Jun 18, 2019 03:47 PM IST. For more news and updates on politics, world, sports, entertainment and lifestyle, log on to our website latestly.com).