Observing that the victim is a tutored witness, the Bombay High Court set aside a lower court's verdict sentencing the man seven years in prison. 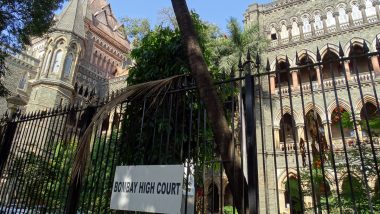 Mumbai, September 8: The Bombay High Court on Wednesday acquitted a man convicted of raping a minor girl in Thane. The man had been sentenced to seven years in prison by the lower court which delivered its verdict in May 2019. Observing that the victim is a tutored witness, the Bombay High Court set aside a lower court's verdict. The High Court further said that a minor victim's testimony should scrutinized and cast doubt on the child's mother's deposition. Touching Kid's Cheeks Without Sexual Intent Does Not Attract Offence of Sexual Assault: Bombay High Court.

"It is well known that minor witnesses, by reason of their tender age, are pliable witnesses. They are amenable to tutoring and inducement and are often prone to telling imaginative and exaggerated stories. Hence, the evidence of a child witness needs to be scrutinized with extreme care and caution," Justice Anuja Prabhudesai was quoted by Live Law as saying. The judge underlined that the victim had admitted to being a tutored witness. Man's Second Marriage Not Domestic Violence Against Divorced First Wife, Says Bombay High Court.

What Is the Case?

Both the accused and the complainant live in the same building. According to the girl's mother, her daughter woke up crying in the middle of the night on December 12, 2017. She had injuries on her genitals. Asked about what had happened with her, the mother said, her daughter told her that their neighbour touched her inappropriately. The accused man, however, told the court that he was framed and there was a dispute between him and the girl's mother over leakage from his toilet.

(The above story first appeared on LatestLY on Sep 08, 2021 05:29 PM IST. For more news and updates on politics, world, sports, entertainment and lifestyle, log on to our website latestly.com).