Cars, Bikes To Get Costlier As Third-Party Vehicle Premium Rates Hiked From June 1

Some bad news for the vehicle owners already affected by the accelerating fuel price increase. From June 1, 2022 onwards, the motor third party liability insurance premium has been jacked up by the central government despite the portfolio being hugely profitable for the insurers. 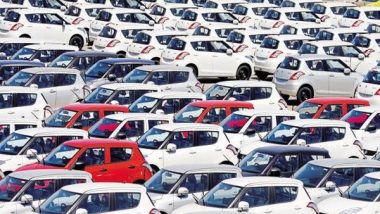 Chennai, May 26: Some bad news for the vehicle owners already affected by the accelerating fuel price increase. From June 1, 2022 onwards, the motor third party liability insurance premium has been jacked up by the central government despite the portfolio being hugely profitable for the insurers.

The central government has also withdrawn the 15 per cent discount on the base premium for electric vehicles (EV) perhaps due to EVs going up in flames in recent times or without any basic claims experience data. Curiously, the three-year third party premium for new cars and the five year two-wheeler premium-paid upfront at the time of buying the vehicle-are higher than the one year renewal policy. RBI Governor Shaktikanta Das Says, ‘May Go for Rate Hike in June; Cryptocurrency Threat to Financial Stability’.

The insurers will also earn an investment income on the premium paid and the benefit has not been passed on to the insuring public. The hiked premium rates per year for more than three year old cars and five year old two wheelers are:

The premium amount charged factors aspects like: expenses, claims outgo and profit. "On what basis the discount on electric vehicles have been arrived at is not known. What is good for goose should be good for the gander. If an electric vehicle is eligible for a premium discount then, other vehicles should also be eligible," industry officials had told IANS earlier preferring anonymity.

At a time when Indian non-life insurers are raking in crores of rupees as premium and paying far less as claims under the motor third party liability policies, the government has proposed a premium hike for 2022-23. "There is very little justification for the hike. The provisions made against the claims are increasing, but not the actual claims pay out. The formula-based premium increase needs to be relooked," K.K. Srinivasan, former member (non-life) of Insurance Regulatory and Development Authority of India (IRDAI), had told IANS earlier.

Contrary to the claims made by the general insurers that they are incurring huge losses under the motor portfolio, the actual numbers as per the Insurance Information Bureau of India (IIB) and studies by industry lobby body General Insurance Council show the contrary. As per the Indian Non-Life Industry Year Book 2020-21 published by the General Insurance Council, the total premium earned under the motor insurance was Rs 67,389 crore by the industry. The industry invests the sum and earns income on this as well.

The industry players also claim that a large number of vehicles run on the roads without third party insurance. However, they do not have any answer when asked how that impacts them as they pay claims only on those policies issued by them and it is for the police to penalise the violators.

According to the Central government, the paid claims data has been considered for construction of cumulative paid claims triangles for each homogenous subclass with Accident Year (AY) as origin year and Financial Year (FY) as development year. In order to arrive at the premium rates, the ultimate claims cost of respective segment for each accident year has been estimated using the actuarial technique of Basic Chain Ladder Method.

(The above story first appeared on LatestLY on May 26, 2022 10:44 AM IST. For more news and updates on politics, world, sports, entertainment and lifestyle, log on to our website latestly.com).