India's central bank is mulling further rate hikes, said its Governor Shaktikanta Das. He also said the Reserve Bank of India (RBI) will not allow the rupee to depreciate and prevent volatility in the currency market. 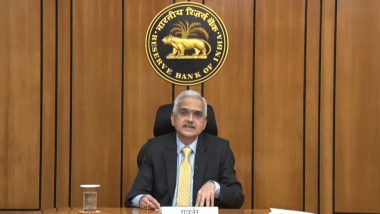 He also said the Reserve Bank of India (RBI) will not allow the rupee to depreciate and prevent volatility in the currency market.

In an interview to the CNBC TV18 channel, Das also said the RBI will release the new forecast for inflation next month. RBI Hikes Repo Rate by 40 Basis Points to 4.40% With Immediate Effect, Home Loans Set to Get Costlier

He said the repo rate will be increased, but declined to say by what percentage.

Early this month, the Monetary Policy Committee (MPC) hiked the benchmark rates by 40bps to 4.4 per cent owing to the inflation at six per cent upper range for four months and Das said it was done to avoid a steep hike in June.

He said the measures taken by RBI will have a sobering effect on retail prices.

According to Das, the current account deficit will be comfortably managed this year.

On the crypto currency, he said the RBI has been cautioning against it and there are questions on how to regulate it.

He said crypto currency will undermine the financial, monetary and macroeconomic stability of the country. The RBI has conveyed its position to the Central government and the latter is more or less in sync with the former.

(The above story first appeared on LatestLY on May 23, 2022 03:17 PM IST. For more news and updates on politics, world, sports, entertainment and lifestyle, log on to our website latestly.com).