Rauf, who was in hiding ever since the PFI was banned in the country, was arrested on Thursday early morning after NIA cordoned off his residence at Pattambi in Kerala. 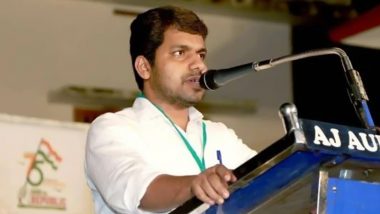 Rauf, who was in hiding ever since the PFI was banned in the country, was arrested on Thursday early morning after NIA cordoned off his residence at Pattambi in Kerala. Coimbatore Car Blast Case: NIA Recovers ‘Incriminating Documents, Bomb Material' From Deceased Jamesha Mubin’s House.

Sources in the intelligence agencies told IANS that Rauf was in hiding in Karnataka and Tamil Nadu ever since the PFI was banned in the country. Jameesha Mubin, who was charred to death in the Coimbatore car blast on October 23, had visited Kerala several times and police are investigating whether he was harboured by the PFI there. Coimbatore Car Blast Case: Tamil Nadu Police Grill Two ‘Islamiya Prachara Peravai’ Leaders in Ramanathapuram.

Another accused Firoz Ismail has, according to investigators, admitted to his relationship with Islamic State (IS) and was deported from UAE in 2019 due to this connection. Firoz has also told the investigators that he had been to Kerala several times and met Mohammed Azharuddin, a conspirator in the Sri Lanka Easter bomb attack. Azharuddin is currently jailed in Viyyur Central jail.

Rauf was a key person who had organised the hartal after PFI was banned which led to widespread stoning and physical assault against transport buses and motor vehicles.

The central intelligence agencies are tracing the phone details of Rauf and are conducting investigation into whether he was instrumental in motivating the deceased Jameesha Mubin and his six accomplices who are jailed under UAPA as accused in the car blast case.

(The above story first appeared on LatestLY on Oct 29, 2022 11:51 AM IST. For more news and updates on politics, world, sports, entertainment and lifestyle, log on to our website latestly.com).