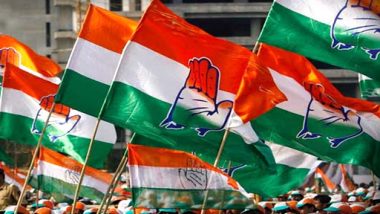 Agartala, January 18: Congress has called for a 12-hour state-bandh on January 19 to protest an attack on state party chief Pijush Kanti Biswas's vehicle, which they alleged was done by Bhartiya Janta Party (BJP) workers. The attack allegedly took place in front of Police at Bisalghar in Sepahijala District on Sunday.

Congress also appealed to all the opposition parties, BJP ally IPFT and BJP MLAs protesting against to support the bandh. "It was a murder attempt. We don't support violence and are protesting peacefully. People are supporting our bandh," a Congress worker said. Congress workers had gathered outside a party office in Agartala today amid heavy security. Tripura: 3 BJP Leaders, Including State Vice-president Subal Bhowmik, Join Congress Ahead of Lok Sabha Elections 2019.

"Biswas Ji, also a renowned lawyer at the High Court of Tripura, had in advance informed the senior police officials about the program and even got personal guards and police escort. But, in front of them, the attack took place in which he and three other people sustained injuries," alleged Bhowmik.

Three others who were injured along with Biswas who had some head injuries and rushed to Bishalghar Hospital for treatment. A case has been registered with the Bishalghar Police Station.