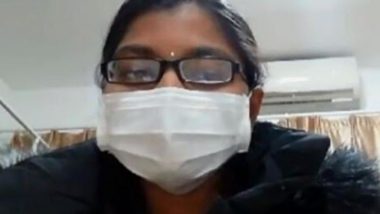 Wuhan, February 3: A woman, who was among the six Indian stopped from coming back to India, has released a video urging the government to help them fly back home from the coronavirus epicentre of Wuhan. Reportedly, four students and two trainees were stopped at immigration during their medical screening just before they were to board the New Delhi-bound aircraft on January 31.

The passengers who were stopped displayed either above normal or fluctuating temperatures during the screening and were asked to move aside from the immigration line. Coronavirus Outbreak: India Updates Travel Advisory for China; Any Indian Who Visits China 'Could be Quarantined' on Return.

According to an NDTV report, the woman, who can be seen with her face covered in a mask, says in the video that she and her colleague do not have any symptom of the fast-moving coronavirus. The young woman from Andhra Pradesh's Kurnool, who is due to be married this month, made an emotional appeal in a video that went viral on Sunday.

#Watch | Andhra woman stranded in #Wuhan, to be wed this month, appeals for help.#Coronavirus #China #Chinavirus

In the video, she further said that the doctors aboard the special flight that brought back 324 Indians told her she would be allowed on the next flight, but was not allowed to board that either. The woman further informed that she is ready to undergo medical tests to prove that she is not infected.

The coronavirus outbreak has killed over 360 people in China and, the first death outside China was reported in the Philippines yesterday. The third positive case of the deadly novel coronavirus (2019-nCoV)  was detected in Kasargod district Kerala on Monday. The patient has been kept in isolation at the Kanjangad District Hospital and his condition is reported to be stable now.

(The above story first appeared on LatestLY on Feb 03, 2020 01:03 PM IST. For more news and updates on politics, world, sports, entertainment and lifestyle, log on to our website latestly.com).