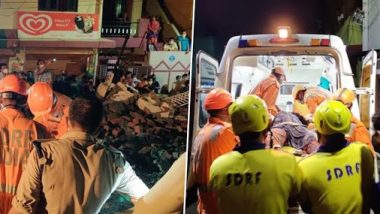 Dehradun, July 15: At least four people have been killed and several others have been rescued alive after a building collapsed in Chukkuwala area of Dehradun in Uttarakhand. Earlier in the day, there were reports that several people have been feared trapped. As soon as the incident was reported, the National Disaster Response Force (NDRF) and the State Disaster Response Fund (SDRF) were pressed into service. Injured have been sent to hospital. The injured ones have been sent to the nearby hospital.

The cause of the incident is yet to be ascertained. However, several media reports claim that the building collapsed following incessant rains in the region. According to an update by Satya Pradhan, Director General of NDRF on Wednesday morning, the team is carrying out the rescue work and have retrieved 3 rescued alive and 3 dead bodies. Monsoon 2020: Heavy Rains Cause Walls to Collapse in Maharashtra's Thane.

#UPDATE Death toll rises to 4 after another body was recovered from the site of building collapse: Satya Pradhan, Director General of National Disaster Response Force

"NDRF team rushed to building collapse site at Chhukhuwala, Dehradun & did search & rescue operation with local SDRF. 3 rescued alive and 3 dead bodies retrieved. Operation on", he said. Reports inform that the building collapsed around 1.30 am last night. The NDRF and SDRF is engaged in rescue work had pulled out six people (3 alive and 3 dead) so far from the rubble.

(The above story first appeared on LatestLY on Jul 15, 2020 08:37 AM IST. For more news and updates on politics, world, sports, entertainment and lifestyle, log on to our website latestly.com).