Delhi Borders to be Sealed For a Week, Salons And Barbershops Allowed to Open: CM Arvind Kejriwal 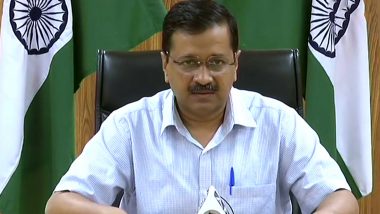 New Delhi, June 1: Delhi Chief Minister Arvind Kejriwal on Monday said the government will borders of the national capital for one week. During the period, only essential service providers will be allowed to enter or exit Delhi, Arvind Kejriwal said. Here it may be noted that Haryana which shared borders with Delhi has repeatedly blamed people travelling to and from the national capital for the rising coronavirus cases in the state. Unlock 1 Guidelines Issued By MHA While Lockdown 5.0 Applied in Containment Zones in India Till June 30.

"We are sealing Delhi borders for one week, only essential services will be allowed. We will make a decision again in one week to open borders after suggestions from citizens," Kejriwal said while addressing the people of Delhi. The Chief Minister also announced the opening of salons and barbershops. "Apart from whatever was allowed till now, barbershops and salons will be opened but spas will remain closed," he said. Haryana To Completely Seal Its Borders With Delhi Amid Spike in COVID-19 Cases, Says State Home Minister Anil Vij.

#WATCH Delhi borders to be sealed for the next one week. Essential services are exempted. We will take a decision again in one week to open borders after suggestions from citizens: Delhi CM Arvind Kejriwal. #COVID19 pic.twitter.com/kHDU4W6Qd4

Kejriwal's announcements come on the first day of the Unlock-1. On Saturday, the Centre took an exit step from the 68-day nationwide lockdown, declaring that the restrictions will be limited only to containment zones up to June 30 and that the prohibited activities will be opened in a phased manner in areas outside these zones, allowing restaurants, malls, religious places and education sectors to open in a phased manner.

(The above story first appeared on LatestLY on Jun 01, 2020 12:30 PM IST. For more news and updates on politics, world, sports, entertainment and lifestyle, log on to our website latestly.com).