The children, aged between nine years and 15 years, are 'auctioned' by their parents to be part of the 'Band baaja baarat' gangs who fly to north India during wedding season and employ juveniles to steal cash and jewellery at big fat weddings in Delhi NCR, Ludhiana and Chandigarh. 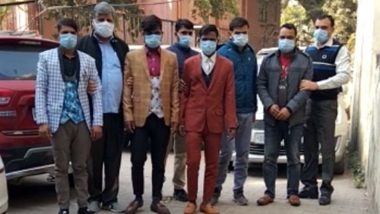 New Delhi, December 4: At an age when they should be going to school, children from villages in Madhya Pradesh's Rajgarh district board planes to metropolises in north India. The reason behind their travel is likely to shock you.

The children, aged between nine years and 15 years, are 'auctioned' by their parents to be part of the 'Band baaja baarat' gangs who fly to north India during wedding season and employ juveniles to steal cash and jewellery at big fat weddings in Delhi NCR, Ludhiana and Chandigarh.

The lease amount for a child ranges between Rs 10 lakh and Rs 12 lakh every year, usually paid in instalments to the parents by the gang members. Delhi Police Says ‘Held Positive Dialogue With Agitating Farmers at Singhu Border’.

Most members of the "Band baaja baarat" gang, popularly known as the wedding-crashers, which targets lavish weddings of North India, hail from Gulkhedi, a small village in Madhya Pradesh's Rajgarh district.

Seven members of the gang, including two juveniles, who were recently apprehended, committed five thefts in Delhi's Kapashera, Mayapuri and Moti Nagar neighbourhoods and three in Punjab.

"There are several gang members operating in wedding season mainly from three villages - Gulkhedi, Kadiya and Silkhedi -- of Madhya Pradesh's Rajgarh District. After the lease deal, the kids are imparted training so that they can target and lift bags of cash, jewellery and other valuables," said DCP Crime Bhisham Singh.

After being brought to Delhi, the children undergo training for a month on how to commit thefts at weddings and how to mingle with people at the venue. A child is also prepared to be mentally and physically tough so that he doesn't divulge his identity and that of his gang members in case he is apprehended. Farmers Protest: Petition Before Supreme Court Seeks Immediate Removal of Protesters From Delhi-NCR Borders.

He is also instructed to put on smart clothes to attend the function and also have the snacks in a manner that does not arouse suspicion. The gang comprises adult men and women as well who usually stay in rented houses and drop the children off at functions and sometimes wait outside in three-wheelers and motorcycles.

"They are never in a hurry. They have their dinner at the marriage party and patiently wait for the opportune moment to strike. They were well-dressed to mingle with guests. In a swift move, they steal the gift bags containing the shagun, jewellery and cash and quickly vanish from the venue," says Shibesh Singh, Additional CP Crime branch.

(The above story first appeared on LatestLY on Dec 04, 2020 10:05 PM IST. For more news and updates on politics, world, sports, entertainment and lifestyle, log on to our website latestly.com).