Delhi police on Saturday registered a first information report against Mahant Swami Yati Narasinghanand Saraswati of Dasna Temple in Ghaziabad for his comments against Prophet Muhammed. The FIR was registered at Parliament Street police station under sections 153-A and 295-A of the Indian Penal Code (IPC). 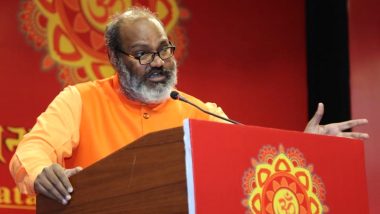 Delhi, April 3: Delhi police on Saturday registered a first information report (FIR) against Mahant Swami Yati Narasinghanand Saraswati of Dasna Devi Temple in Ghaziabad for his comments against Prophet Muhammed. The FIR was registered at Parliament Street police station under sections 153-A and 295-A of the Indian Penal Code (IPC). Swami Yati Narasinghanand Saraswati made the comments during an event at Press Club of India in Delhi.

The video of the priest using offensive language against Prophet Muhammad also surfaced on social media. The police took cognisance of the incident and registered the FIR. After the video surfaced, the Aam Aadmi Party (AAP) MLA Amanatullah Khan demanded strict against the Swami Yati Narasinghanand Saraswati. He also registered a complaint against the priest at Jamia Nagar police station. Stop Broadcast of Film on Prophet Muhammad: Deshmukh to Centre.

Khan in another tweet, said, “We cannot tolerate the insult of our prophet. both the tongue and the neck of this hated worm should be cut and should be punished severely. But the law of India does not allow us to do this, we have faith in the constitution of the country, and I want the Delhi Police to take cognisance of it.” Emmanuel Macron Has Attacked Islam and Hurt Sentiments of Muslims: Pakistan PM Imran Khan Over Prophet's Cartoon Row in France.

AIMIM chief Asaduddin Owaisi also condemned the remarks, He tweeted, “Prophet (SAW) is unacceptable. Can these criminals acting as religious teachers get over their unnatural fixation with Islam? For something that you do not like, you do spend a lot of time on it. I’m sure there’s enough in your own belief system that you can discuss.”

Notably, the video of the event surfaced on social media on April 2. The priest also asked for donations and called upon Hindus to stand against Muslims. Last month also, Saraswati's name cropped up in an incident where a Muslim boy was allegedly beaten up by “sevak” of the Dasna Devi Mandir for entering the temple to drink water.

(The above story first appeared on LatestLY on Apr 03, 2021 11:53 PM IST. For more news and updates on politics, world, sports, entertainment and lifestyle, log on to our website latestly.com).