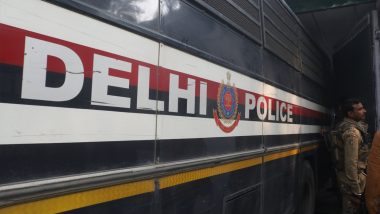 New Delhi, August 16: A 70-year-old bedridden woman and her daughter-in-law were found murdered at their home in northeast Delhi's Subhash Park area on Tuesday, police said. The two women, Vimla Devi and her daughter-in-law Doli Rai (45), were stabbed multiple times, causing the latter's intestines to come out. It is suspected that the assailant was known to the family as there were no signs of forced entry, they said.

Deputy Commissioner of Police (northeast) Sanjay Kumar Sain said Rai's sons Sarthak and Shashank had gone to Rishikesh and Mussoorie for two-three days. They found the bodies after they returned home and informed the police. A PCR call was received around 4.20 am about the murder in the Welcome police station area, the DCP said. Delhi: 26-Year-Old Woman Found Dead Inside Closet At Her House, Probe Underway.

The bodies bore multiple stab wounds. Crime and Forensic Science Laboratory (FSL) teams have examined the house, the police said. Devi was bedridden for the last three-four years and stayed on the first floor of the four-storey house, they said.

Preliminary inquiry revealed that Devi was smothered before being stabbed. Rai was stabbed multiple times in the stomach. Her intestines came out as her stomach swelled, they said, adding that it appears that they were murdered two days ago.

It is suspected the women were killed in a robbery gone wrong. The house was ransacked and an Apple watch was found missing. Its location has been traced to Haridwar, the police said.

It seems that the assailant was known to the family as there were no signs of forceful entry. The family's pet dog was found locked in a room on the third floor of the house, they said. Footage of two CCTV cameras installed in the house is being scanned to identify suspects, they said.

Rai's niece Prerna Sharma said, "My elder sister received a call from Shashank about the murders, following which we rushed here early morning. The brothers were not at home at the time of the incident, they had gone on a trip with their friends. The family runs a puja 'samagri' business and runs a shop in Chandni Chowk."