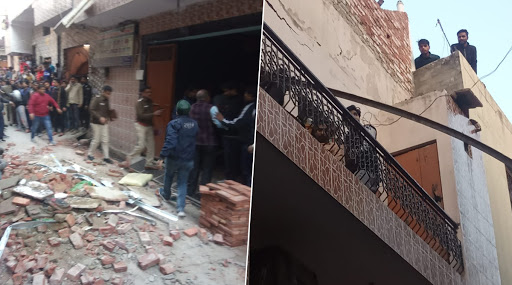 New Delhi, January 25: In a sad incident, an under construction building collapsed in Bhajanpura area of the national capital on Saturday. Reports claim that a coaching centre was being run in the building. Initial reports claim that three children and a teacher were dead and 13 others are being treated at the nearby hospital. Delhi Chief Minister Arvind Kejriwal is on his way to the spot where the incident took place. Meanwhile, the rescue operation is underway.

Following the report of building collapse, seven fire units if the Delhi Fire Service were push for rescue operation. Also, emergency services like ambulances have reached the spot. Along with the local people, fire fighting officials are trying to rescue the trapped people. Initially it was stated that seven students were injured in the incident, while several others are feared trapped. However, with time reports arrived that four children died.

Delhi: An under construction building in Bhajanpura area collapsed today; a coaching centre was being run in the building. Some students are feared trapped. Seven fire units have been sent to the site.