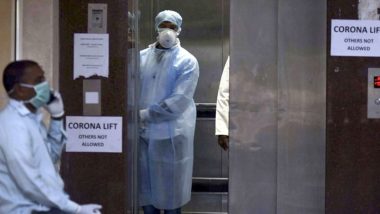 New Delhi, July 4: The COVID-19 cure rate in Delhi crossed 70 percent on Saturday, with more recoveries being recorded in past 24 hours as compared to new infections. The corresponding period also saw the death toll crossing the 3,000-mark, with 55 coronavirus patients succumbing to the disease. COVID-19 Vaccine by August 15: 'Fast-Tracking Process in Accordance to Global Norms', ICMR Responds to Criticism.

The cumulative toll of recoveries stood at 68,256 - way higher than the number of active cases which was stated as 25,940. The overall count of cases is 97,200. As per the stats, the recovery rate in the national capital was found to be 70.2 percent.

The recent numbers released by the Delhi government signal a slow down in rate of transmission, as experts had last month feared that Delhi would cross the 1.25 lakh-mark in first week of July.

9,925 RT-PCR and 13,748 rapid antigen tests have been conducted in Delhi today, taking the total number of COVID-19 tests to 6,20,378. 3,2650 tests are being conducted on per million population: Delhi Health Department https://t.co/ZcVZJzwPqM

The Delhi government combined with th Centre in the fight against coronavirus last month, after the health crisis was feared to peak at unprecedented level.

Union Home Minister Amit Shah, while speaking to news agency ANI last month, claimed that the central government decided to intervene after taking cognisance of Deputy Chief Minister Manish Sisodia's claim of an "estimated 5.5 lakh cases" in Delhi by July-end. According to Shah, the situation has been controlled and will not deteriorate to that extent.

(The above story first appeared on LatestLY on Jul 04, 2020 08:05 PM IST. For more news and updates on politics, world, sports, entertainment and lifestyle, log on to our website latestly.com).