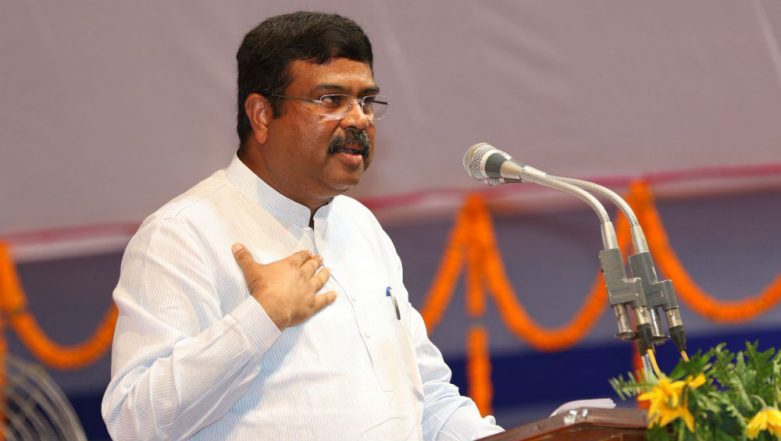 New Delhi, May 13: Union Petroleum and Natural Gas Minister Dharmendra Pradhan has promised to supply 1,000 kilo-liter of subsided kerosene to Odisha, as per a request made by state chief minister Naveen Patnaik in the aftermath of cyclone Fani.

Pradhan said that an oil PSU under the Petroleum and Natural Gas ministry will contribute Rs 3.2 crore from its CSR fund to the Chief Minister Relief Fund."In this connection, I wish to inform you that I have advised one of the PSUs under the Ministry of Petroleum and Natural Gas to contribute around Rs 3.2 crore (equivalent of the cost of 1000 kilo-liter of subsided kerosene on cost basis) through CSR fund to the CM Relief Fund to meet the requirement," Pradhan said in a letter dated May 11."Further, it is informed that additional quantity of 1,000 kilo-litre of subsided kerosene has been made available for lifting by the state government. Alongside, sufficient supplies of petrol, diesel and LPG have already been ensured in the cyclone-affected areas in Odisha," he added. Cyclone Fani Death Toll in Odisha Jumps to 64, Puri Records Highest Casualties.

The Union Minister affirmed that the Petroleum and Natural Gas ministry and its PSUs will continue to provide assistance to the Odisha government in the aftermath of the cyclonic storm. The state government said that the death toll in the state due to cyclone Fani touched 64. Puri recorded the maximum number of casualties (39), followed by Khordha (9), Cuttack (6), Jajpur (4), Mayurbhanj (4) and Kendrapada (3). According to government data, livestock casualties are over 34 lakhs and over one crore sixty-five lakh people were adversely affected by Fani in the state.

The government informed that road communication in Ganjam and Gajapati have been completely restored. Road clearance and restoration work in other districts, including Bhubaneswar city, are underway. Besides, the state government has claimed to restore 100 per cent water supply to Cuttack, Khordha, and Jatni. Also, Puri, Bhubaneswar, Konark, and Nimapara have already achieved cent per cent restoration of water supply. Cyclone Fani, which made landfall in Puri district on May 3, left a trail of destruction in the state.