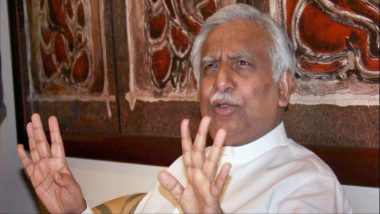 Mumbai, June 27: The Enforcement Directorate (ED) has objected to the Mumbai Police filing a closure report in a cheating case registered earlier against now-defunct Jet Airways, its promoter Naresh Goyal, and his wife. Stating that the police didn't consider crucial facts of the case, the ED has filed an intervention application before a court.

Jet Airways, Goyal and his wife Anita were booked on charges of cheating and a criminal beach of trust in February this year by MRA Marg police on a complaint filed by city- based Akbar Travels India Private Limited alleging that they were cheated of Rs 46 crore by the Goyals. Jet Airways Founder Naresh Goyal Appears Before ED in Connection With Money Laundering Case Against Yes Bank Founder Rana Kapoor.

"The report by the city police seemed to have been filed without any proper investigation. No investigation has been done on our allegations of personal assurances by the director (of Jet Airways) and also on foreign account details provided by the complainant," Akbar Travel's counsel Dharmesh Joshi said on Saturday, adding that they will file a petition on July 6.

As per the complaint filed with the police earlier, Jet Airways had done business worth Rs 900 crore with Akbar Travels between 2018-19. It alleged that the airline and its promoter have failed to pay Rs 46,05,68,036 to the travel company.

Despite knowing the financial crisis at Jet Airways, which was in position of no return, Naresh Goyal made false promises. He willfully induced the travel company to take booking on behalf of the airline, the complaint stated. The ED is conducting a probe against the Goyal's and the defunct airline under the Prevention of Money Laundering Act and Foreign Exchange Management Act.