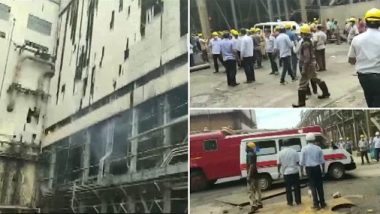 Chennai, July 1: As many as six people have died and 17 others have been  injured after an explosion at a lignite plant in Tamil Nadu's Cuddalore district on Wednesday. According to a tweet by ANI, the blast took place at a boiler in stage -2 of the Neyveli lignite plant in Cuddalore district in Tamil Nadu. Reports inform that the injured ones have been taken to NLC lignite hospital. Confirming the deaths, M. Sree Abhinav, Cuddalore Superintendent of Police said that so far, six people have lost their lives.

Earlier in May, a similar boiler blast was reported at the government-owned Neyveli Lignite Corporation's Thermal power plant in which seven people were injured. The power generated from this power plant is shared by several southern states including Tamil Nadu, Kerala, Karnataka, Andhra Pradesh and Union Territory of Pondicherry. Gujarat: Fire Breaks Out at Factory in Bharuch Due to Boiler Blast, 40 Workers Injured.

On Tuesday, a gas leak incident was reported from Andhra Pradesh in which a total of two workers lost their lives while four others were hospitalised. The  leakage of Benzimidazole gas was reported from Sainor Life Sciences Pvt Ltd in Visakhapatnam.

(The above story first appeared on LatestLY on Jul 01, 2020 01:11 PM IST. For more news and updates on politics, world, sports, entertainment and lifestyle, log on to our website latestly.com).