Falguni Nayar Enters The League of India's Wealthiest Self-Made Female Billionaire with a Net Worth of $6.5 Billion After Nykaa's Bumper Stock Exchange Debut

With the bumper debut of Nykaa in the share market, its owner-founder Falguni Nayar rose to the ranks to India's wealthiest self-made women billionaire with a net worth of $6.5 billion. She founded the personal care, beauty platform in 2012. 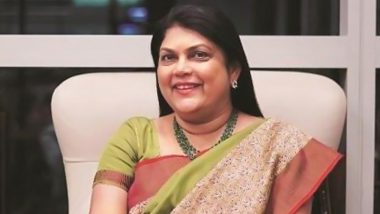 New Delhi, November 10: Falguni Nayar, the founder-owner of Nykaa, is now India's wealthiest self-made female billionaire as the beauty and cosmetic online start-up had a bumper debut in the stock market on Wednesday. Nayar net worth surged to a whooping $6.5 billion as Nykaa's shares gained as much as 89 per cent in the starting trade. She and her family have around half of the stake in the beauty, personal care and fashion start-up. Nykaa Owner Falguni Nayar Becomes India's Richest Self-Made Female Billionaire With The E-Commerce Firm's IPO Launch.

Nykaa's shares, which open in the stock market today, was an highly waited by the investor. The company’s market cap crossed the Rs-100,000 crore mark within a few hours of its debut, bagging Nayar a spot in the league of the richest people. The shares of FSN E-Commerce Venture Limited, which is the parent company of Nykaa, opened at a premium of around 78 per cent, i.e, at Rs 2,001 while it was originally offered within a price range of Rs 1,085 to Rs 1,125. Here Is All You Need to Know About Nykaa IPO.

Now a leading brand in personal care and fashion, Nykaa was founded by Nayar, who is a IIM-Ahmedabad graduate, in 2012 and started her entrepreneurship journey. She had previously work in several big-shot organisation including Kotak Mahindra Group and was appointed as the MD of Kotak Investment Banking in 2007. However she left the company in 2012 and started one of the leading beauty-personal care firm - which also aptly describes her and several women living their dreams and leading by exmaple - 'Nykaa.'

(The above story first appeared on LatestLY on Nov 10, 2021 05:48 PM IST. For more news and updates on politics, world, sports, entertainment and lifestyle, log on to our website latestly.com).